A Sketch of the Life of the late Henry Cooper Barrister-at-Law, of the Norfolk Circuit; as also, of his Father 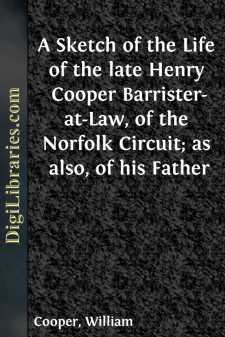 In attempting the life of my late brother, who, after struggling for years at the bar in almost obscurity, had, on a sudden, his brilliancy noticed and his great talents acknowledged, and no sooner had he reached that eminence in his profession, when all was made easy before him, than unpitying Clolho stept up, and cut his thread of life; I must ask your indulgence, for the reasons you will see, as you proceed in this my life of him, as also, from the very scanty materials I have been able to collect for it.  How the first idea of this suggested itself to my mind, I will tell you; a few days ago, I was about to re-publish some Dramas, written by me in earlier years, and thinking one of them would scarcely make a volume by itself, the thought struck me, on looking over my treasures, and finding some verses of my brother Henry in his own hand writing, amidst many youthful rhymes of my own and of my family, that I would string them together, and so swell the work alluded to.  To do this I thought it necessary to affix a short heading to each, to particularize the writer, and for this purpose wrote, to head my brother’s, a short biographical sketch of him, consisting of about thirty lines, and quitting my house, left it on my way to chambers at my printers, returned home, the labours of the day over,—went to bed, but not to sleep, thought of my late brother, of that I had written of him, pondered over the past anecdotes of his life, that had been often told me, recalled his image to my memory, and amidst airy visions of the past, of my father, earlier days, and of youthful pleasures mixed with pain, fell asleep—but—with a determination.  To carry it out,—on the morrow I began this sketch.  You must judge how I have performed my self-imposed task, and wishing it may amuse you, and encourage young aspirants who shall chance to read it, not to give way under difficulties, but strenuously to persevere, seeing how much may be achieved by diligence and a determination not to yield, remembering ever the good advice and the useful maxim delivered of old:—

I am, yours faithfully,W. COOPER.

The subject of the present memoir, Henry Cooper, was born at a house in Bethel Street, in the City of Norwich, now well-known as the late residence of Alderman Hawkes, and where resided for many years his father, Charles, now better known as Old Counsellor Cooper, a remarkable man, who, like the late William Cobbett, though of humble origin, possessed one of those minds that will and must, as they have ever done from the time of Deioces of Ecbatana (recorded by Herodotus) till now, elevate the possessor and compel the homage, whilst exciting the no small envy of inferior intellects.  What education he received was at a small school kept by the Rev. John Bruckner (a Lutheran Divine), who died in 1804, and was buried at Guist, in Norfolk, where French, Latin, and the common rudiments of an English education were taught; and where, too, the late William Taylor,—perhaps one of the most extraordinary men Norwich ever produced, the early and intimate friend of Southey, and who was the first, according to Lockhart’s Life of Scott, to give that great writer a taste for poetry by his (Taylor’s) spirited and inimitable translation of Bürger’s well known ballad beginning,—

“At break of day from frightful dreams up started Eleanor,”

was his fellow pupil, and who has told me what a gentle, industrious, and amiable boy he remembered my father (truly, in this instance, the child was father of the man); there he acquired, no doubt, some knowledge, but it was far more to his own self-instruction that he was indebted for the large and varied knowledge he possessed, for, as his brother Samuel (his only and younger brother,—he had a sister but she died young) informed my mother that such was his early thirst for knowledge, that he not only repudiated all play, and the sports of boyhood, taught himself Greek, and greedily devoured the contents of every book that came within his reach, but would, with the pocket-money given him, purchase candles, and when the family had retired to rest, light one, and sit and read till the dawn of day, when he would creep into bed, and sleep till the hour of call, when he would rise to resume anew his mental exercise.  So years past by, and the young and sickly looking boy grew into the youth, when his father, a man of strong intellect, with a great deal of sound common sense, perceiving the bent of his son’s mind,—and being a man who had retired early in life from business with a small property, on which he lived in a house at Heigham (a hamlet within the city),—at once placed his son Charles with one of the most respectable attornies, in large business in Norwich, as an articled clerk to the law, where he very soon, by his persevering industry, his assiduity, and the great acuteness shown in every matter entrusted to his care and management, so conciliated the good opinion of his master, who discovered progressively, the evident marks of superior abilities [here, too, he indulged to an excess his insatiable thirst for reading, that he would sit up the greater part of the night for this purpose, to the neglect and injury of his health], that at the termination of his engagement, his conduct was so acceptable, and his services so manifest, and his influence, too, among the clients, was found to be so extensive, that on his obtaining his certificate to practise as an attorney, his principal was glad to offer him a share in the business, and receive him as a partner; the reputation he had already acquired became wide spread, and quickly raised the firm in the estimation of the public, and clients flocked to it, and all would see, if they could, and consult with Mr....