A Short History of French Literature 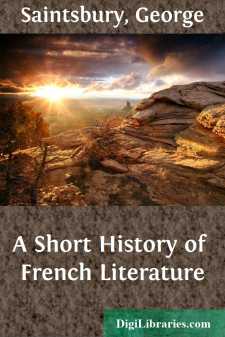 An attempt to present to students a succinct history of the course of French literature compiled from an examination of that literature itself, and not merely from previous accounts of it is, I believe, a new one in English. There will be observed in the parts of this Short History a considerable difference of method; and as such a difference is not usual in works of the kind, it may be well to state the reasons which have induced me to adopt it. Early French literature is to a great extent anonymous. Moreover, even where it is not, the authors were usually more influenced by certain prevalent styles or forms than by anything else. Into these forms they threw without considerations of congruity whatever they had to say. Nothing, for instance, can be less suitable for historical or scientific disquisition than the octosyllabic metre of a satiric poem. But Jean de Meung and one at least of the authors of Renart le Contrefait do not think of composing prose diatribes. At one moment and place the form of the Chanson de Geste is all-absorbing, at another the form of the Roman d'Aventures, at another the form of the Fabliau. In Book I. I shall therefore proceed by these forms, giving an account of each separately.

After Villon the case changes. Instead of classes of chroniclers, trouvères, jongleurs, we get individual authors of eminence and individuality striking out their own way and saying their own say in the manner not that is fashionable but that seems best to them. During this time, therefore, and especially during that brilliant age of French literature, the sixteenth century, I shall proceed by authors, taking the most remarkable individually, and grouping their followers around them.

From the time of Malherbe the system of schools begins, divided according to subjects. The poet, the dramatist, the historian, have their predecessors, and either intentionally copy them or intentionally innovate upon them. Malherbe and Delille, Corneille and Lemercier, Sarrasin and Rulhière, whatever the difference of merit, stand to one another in a definite relation, and the later writers represent more or less the accepted traditions each of his school. In this part, therefore, I shall proceed by subjects, taking historians, poets, dramatists, etc., together. One difference will be noticed between the third and fourth Books, dealing respectively with the seventeenth and eighteenth centuries. It has seemed unnecessary to allot a special chapter to theological and ecclesiastical writing in the latter, or to scientific writing in the former.

Almost all writers who have attempted literary histories in a small compass have recognised the difficulty, or rather impossibility, of treating contemporary or recent work on the same scale as older authors. In treating, therefore, of literature subsequent to the appearance of the Romantic movement, I shall content myself with giving a rapid sketch of the principal literary developments and their exponents.

There are doubtless objections to this quadripartite arrangement; but it appears to me better suited for the purpose of laying the foundations of an acquaintance with French literature than a more uniform plan....