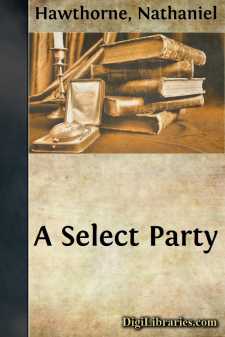 The man of fancy made an entertainment at one of his castles in the air, and invited a select number of distinguished personages to favor him with their presence. The mansion, though less splendid than many that have been situated in the same region, was nevertheless of a magnificence such as is seldom witnessed by those acquainted only with terrestrial architecture. Its strong foundations and massive walls were quarried out of a ledge of heavy and sombre clouds which had hung brooding over the earth, apparently as dense and ponderous as its own granite, throughout a whole autumnal day. Perceiving that the general effect was gloomy,—so that the airy castle looked like a feudal fortress, or a monastery of the Middle Ages, or a state prison of our own times, rather than the home of pleasure and repose which he intended it to be,—the owner, regardless of expense, resolved to gild the exterior from top to bottom. Fortunately, there was just then a flood of evening sunshine in the air. This being gathered up and poured abundantly upon the roof and walls, imbued them with a kind of solemn cheerfulness; while the cupolas and pinnacles were made to glitter with the purest gold, and all the hundred windows gleamed with a glad light, as if the edifice itself were rejoicing in its heart.

And now, if the people of the lower world chanced to be looking upward out of the turmoil of their petty perplexities, they probably mistook the castle in the air for a heap of sunset clouds, to which the magic of light and shade had imparted the aspect of a fantastically constructed mansion. To such beholders it was unreal, because they lacked the imaginative faith. Had they been worthy to pass within its portal, they would have recognized the truth, that the dominions which the spirit conquers for itself among unrealities become a thousand times more real than the earth whereon they stamp their feet, saying, "This is solid and substantial; this may be called a fact."

At the appointed hour, the host stood in his great saloon to receive the company. It was a vast and noble room, the vaulted ceiling of which was supported by double rows of gigantic pillars that had been hewn entire out of masses of variegated clouds. So brilliantly were they polished, and so exquisitely wrought by the sculptor's skill, as to resemble the finest specimens of emerald, porphyry, opal, and chrysolite, thus producing a delicate richness of effect which their immense size rendered not incompatible with grandeur. To each of these pillars a meteor was suspended. Thousands of these ethereal lustres are continually wandering about the firmament, burning out to waste, yet capable of imparting a useful radiance to any person who has the art of converting them to domestic purposes. As managed in the saloon, they are far more economical than ordinary lamplight. Such, however, was the intensity of their blaze that it had been found expedient to cover each meteor with a globe of evening mist, thereby muffling the too potent glow and soothing it into a mild and comfortable splendor. It was like the brilliancy of a powerful yet chastened imagination,—a light which seemed to hide whatever was unworthy to be noticed and give effect to every beautiful and noble attribute. The guests, therefore, as they advanced up the centre of the saloon, appeared to better advantage than ever before in their lives.

The first that entered, with old-fashioned punctuality, was a venerable figure in the costume of bygone days, with his white hair flowing down over his shoulders and a reverend beard upon his breast. He leaned upon a staff, the tremulous stroke of which, as he set it carefully upon the floor, re-echoed through the saloon at every footstep. Recognizing at once this celebrated personage, whom it had cost him a vast deal of trouble and research to discover, the host advanced nearly three fourths of the distance down between the pillars to meet and welcome him.

"Venerable sir," said the Man of Fancy, bending to the floor, "the honor of this visit would never be forgotten were my term of existence to be as happily prolonged as your own."

The old gentleman received the compliment with gracious condescension. He then thrust up his spectacles over his forehead and appeared to take a critical survey of the saloon....