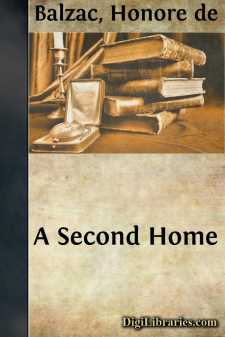 The Rue du Tourniquet-Saint-Jean, formerly one of the darkest and most tortuous of the streets about the Hotel de Ville, zigzagged round the little gardens of the Paris Prefecture, and ended at the Rue Martroi, exactly at the angle of an old wall now pulled down. Here stood the turnstile to which the street owed its name; it was not removed till 1823, when the Municipality built a ballroom on the garden plot adjoining the Hotel de Ville, for the fete given in honor of the Duc d'Angouleme on his return from Spain.

The widest part of the Rue du Tourniquet was the end opening into the Rue de la Tixeranderie, and even there it was less than six feet across. Hence in rainy weather the gutter water was soon deep at the foot of the old houses, sweeping down with it the dust and refuse deposited at the corner-stones by the residents. As the dust-carts could not pass through, the inhabitants trusted to storms to wash their always miry alley; for how could it be clean? When the summer sun shed its perpendicular rays on Paris like a sheet of gold, but as piercing as the point of a sword, it lighted up the blackness of this street for a few minutes without drying the permanent damp that rose from the ground-floor to the first story of these dark and silent tenements.

The residents, who lighted their lamps at five o'clock in the month of June, in winter never put them out. To this day the enterprising wayfarer who should approach the Marais along the quays, past the end of the Rue du Chaume, the Rues de l'Homme Arme, des Billettes, and des Deux-Portes, all leading to the Rue du Tourniquet, might think he had passed through cellars all the way.

Almost all the streets of old Paris, of which ancient chronicles laud the magnificence, were like this damp and gloomy labyrinth, where the antiquaries still find historical curiosities to admire. For instance, on the house then forming the corner where the Rue du Tourniquet joined the Rue de la Tixeranderie, the clamps might still be seen of two strong iron rings fixed to the wall, the relics of the chains put up every night by the watch to secure public safety.

This house, remarkable for its antiquity, had been constructed in a way that bore witness to the unhealthiness of these old dwellings; for, to preserve the ground-floor from damp, the arches of the cellars rose about two feet above the soil, and the house was entered up three outside steps. The door was crowned by a closed arch, of which the keystone bore a female head and some time-eaten arabesques. Three windows, their sills about five feet from the ground, belonged to a small set of rooms looking out on the Rue du Tourniquet, whence they derived their light. These windows were protected by strong iron bars, very wide apart, and ending below in an outward curve like the bars of a baker's window.

If any passer-by during the day were curious enough to peep into the two rooms forming this little dwelling, he could see nothing; for only under the sun of July could he discern, in the second room, two beds hung with green serge, placed side by side under the paneling of an old-fashioned alcove; but in the afternoon, by about three o'clock, when the candles were lighted, through the pane of the first room an old woman might be seen sitting on a stool by the fireplace, where she nursed the fire in a brazier, to simmer a stew, such as porters' wives are expert in....