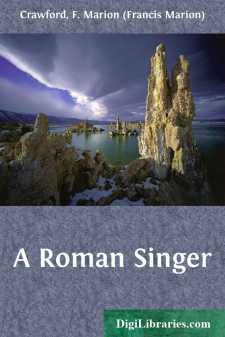 I, Cornelio Grandi, who tell you these things, have a story of my own, of which some of you are not ignorant. You know, for one thing, that I was not always poor, nor always a professor of philosophy, nor a scribbler of pedantic articles for a living. Many of you can remember why I was driven to sell my patrimony, the dear castello in the Sabines, with the good corn-land and the vineyards in the valley, and the olives, too. For I am not old yet; at least, Mariuccia is older, as I often tell her. These are queer times. It was not any fault of mine. But now that Nino is growing to be a famous man in the world, and people are saying good things and bad about him, and many say that he did wrong in this matter, I think it best to tell you all the whole truth and what I think of it. For Nino is just like a son to me; I brought him up from a little child, and taught him Latin, and would have made a philosopher of him. What could I do? He had so much voice that he did not know what to do with it.

His mother used to sing. What a piece of a woman she was! She had a voice like a man's, and when De Pretis brought his singers to the festa once upon a time, when I was young, he heard her far down below, as we walked on the terrace of the palazzo, and asked me if I would not let him educate that young tenor. And when I told him it was one of the contadine, the wife of a tenant of mine, he would not believe it. But I never heard her sing after Serafino—that was her husband—was killed at the fair in Genazzano. And one day the fevers took her, and so she died, leaving Nino a little baby. Then you know what happened to me, about that time, and how I sold Castel Serveti and came to live here in Rome. Nino was brought to me here. One day in the autumn a carrettiere from Serveti, who would sometimes stop at my door and leave me a basket of grapes in the vintage, or a pitcher of fresh oil in winter, because he never used to pay his house-rent when I was his landlord—but he is a good fellow, Gigi—and so he tries to make amends now; well, as I was saying, he came one day and gave me a great basket of fine grapes, and he brought Nino with him, a little boy of scarce six years—just to show him to me, he said.

He was an ugly little boy, with a hat of no particular shape and a dirty face. He had great black eyes, with ink-saucers under them, calamai, as we say, just as he has now. Only the eyes are bigger now, and the circles deeper. But he is still sufficiently ugly. If it were not for his figure, which is pretty good, he could never have made a fortune with his voice. De Pretis says he could, but I do not believe it.

Well, I made Gigi come in with Nino, and Mariuccia made them each a great slice of toasted bread and spread it with oil, and gave Gigi a glass of the Serveti wine, and little Nino had some with water. And Mariuccia begged to have the child left with her till Gigi went back the next day; for she is fond of children and comes from Serveti herself. And that is how Nino came to live with us....