A Prince of Bohemia 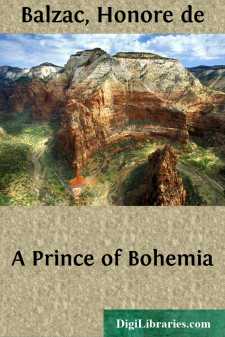 A PRINCE OF BOHEMIA

"My dear friend," said Mme. de la Baudraye, drawing a pile of manuscript from beneath her sofa cushion, "will you pardon me in our present straits for making a short story of something which you told me a few weeks ago?"

"Anything is fair in these times. Have you not seen writers serving up their own hearts to the public, or very often their mistress' hearts when invention fails? We are coming to this, dear; we shall go in quest of adventures, not so much for the pleasure of them as for the sake of having the story to tell afterwards."

"After all, you and the Marquise de Rochefide have paid the rent, and I do not think, from the way things are going here, that I ever pay yours."

"Who knows? Perhaps the same good luck that befell Mme. de Rochefide may come to you."

"Do you call it good luck to go back to one's husband?"

"No; only great luck. Come, I am listening."

"Scene—a splendid salon in the Rue de Chartres-du-Roule. Oneof the most famous writers of the day discovered sitting on asettee beside a very illustrious Marquise, with whom he is onsuch terms of intimacy, as a man has a right to claim when awoman singles him out and keeps him at her side as a complacentsouffre-douleur rather than a makeshift."

"Well," says she, "have you found those letters of which you spoke yesterday? You said that you could not tell me all about him without them?"

"It is your turn to speak; I am listening like a child when his mother begins the tale of Le Grand Serpentin Vert."

"I count the young man in question in that group of our acquaintances which we are wont to style our friends. He comes of a good family; he is a man of infinite parts and ill-luck, full of excellent dispositions and most charming conversation; young as he is, he is seen much, and while awaiting better things, he dwells in Bohemia. Bohemianism, which by rights should be called the doctrine of the Boulevard des Italiens, finds its recruits among young men between twenty and thirty, all of them men of genius in their way, little known, it is true, as yet, but sure of recognition one day, and when that day comes, of great distinction. They are distinguished as it is at carnival time, when their exuberant wit, repressed for the rest of the year, finds a vent in more or less ingenious buffoonery.

"What times we live in! What an irrational central power which allows such tremendous energies to run to waste! There are diplomatists in Bohemia quite capable of overturning Russia's designs, if they but felt the power of France at their backs. There are writers, administrators, soldiers, and artists in Bohemia; every faculty, every kind of brain is represented there. Bohemia is a microcosm. If the Czar would buy Bohemia for a score of millions and set its population down in Odessa—always supposing that they consented to leave the asphalt of the boulevards—Odessa would be Paris with the year. In Bohemia, you find the flower doomed to wither and come to nothing; the flower of the wonderful young manhood of France, so sought after by Napoleon and Louis XIV., so neglected for the last thirty years by the modern Gerontocracy that is blighting everything else—that splendid young manhood of whom a witness so little prejudiced as Professor Tissot wrote, 'On all sides the Emperor employed a younger generation in every way worthy of him; in his councils, in the general administration, in negotiations bristling with difficulties or full of danger, in the government of conquered countries; and in all places Youth responded to his demands upon it....