A Practical Discourse on Some Principles of Hymn-Singing 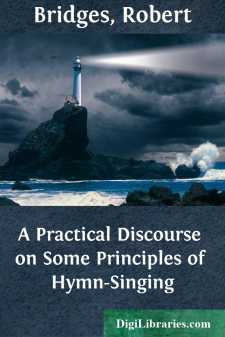 What St. Augustin says of the emotion which he felt on hearing the music in the Portian basilica at Milan in the year 386 has always seemed to me a good illustration of the relativity of musical expression; I mean how much more its ethical significance depends on the musical experience of the hearer, than on any special accomplishment or intrinsic development of the art. Knowing of what kind that music must have been and how few resources of expression it can have had,--being rudimental in form, without suggestion of harmony, and in its performance unskilful, its probably nasal voice-production unmodified by any accompaniment,--one marvels at his description,

'What tears I shed at Thy hymns and canticles, how acutely was my soul stirred by the voices and [2] sweet music of Thy Church! As those voices entered my ears, truth distilled in my heart, and thence divine affection welled up in a flood, in tears o'erflowing, and happy was I in those tears.'

St. Augustin appears to have witnessed the beginnings of the great music of the Western Church. It was the year of his baptism when, he tells us, singing was introduced at Milan to cheer the Catholics who had shut themselves up in the basilica with their bishop, to defend him from the imperial violence:

'It was then instituted that psalms and hymns should be sung, after the manner of the Eastern Churches, lest the folk in the weariness of their grief should altogether lose heart: and from that day to this the custom has been retained; many, nay, nearly all Thy flocks, in all regions of the world, following the example.'

What great emotional power St. Augustin attributed to ecclesiastical music, and of what importance he thought it, may be seen in the tenth book of the Confessions: he is there examining himself under the heads of the senses, and after the sense of smell, his chapter on the sense of hearing is as follows:

'The lust of the ears entangled and enslaved me [3] more firmly, but Thou hast loosened and set me free. But even now I confess that I do yield a very little to the beauty of those sounds which are animated by Thy eloquence, when sung with a sweet and practised voice; not, indeed, so far that I am limed and cannot fly off at pleasure: and yield though I do, yet these sweet sounds, joined with the divine words which are their life, cannot be admitted to my heart save to a place of some dignity, and I hesitate to give them one as lofty as their claim.

'For sometimes I seem to myself to be allowing them undue honour, when I feel that our minds are really moved to a warmer devotion and more ardent piety by the holy words themselves when they are so sung than when they are not so sung; and when I recognize that all the various moods of our spirit have their proper tones in speech and song, by which they are, through I know not what secret familiarity, excited. But the mere sensuous delight, to which it is not fitting to resign the mind to be enervated thereby, often deceives me, whenever (that is) the delight of the senses does not so accompany the reason as to be cheerfully in submission thereto, but, having been admitted only for reason's sake, then even attempts to go before and to lead. Thus I sin without knowing, but afterwards I know.

'Then awhile, from too immoderate caution against this deception, I err on the side of too great severity; and sometimes go so far as to wish that all the melody of the sweet chants which are used in the Davidian psalter were utterly banished from my ears, and from the ears of the Church; and that way seems to me safer which I remember often to have heard told of Athanasius, archbishop of Alexandria, that he would have the lector of the psalm intone it with but a slight modulation of voice, so as to be more like one reading than one singing....