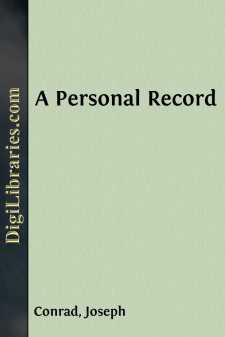 As a general rule we do not want much encouragement to talk about ourselves; yet this little book is the result of a friendly suggestion, and even of a little friendly pressure. I defended myself with some spirit; but, with characteristic tenacity, the friendly voice insisted, "You know, you really must."

You perceive the force of a word. He who wants to persuade should put his trust not in the right argument, but in the right word. The power of sound has always been greater than the power of sense. I don't say this by way of disparagement. It is better for mankind to be impressionable than reflective. Nothing humanely great—great, I mean, as affecting a whole mass of lives—has come from reflection. On the other hand, you cannot fail to see the power of mere words; such words as Glory, for instance, or Pity. I won't mention any more. They are not far to seek. Shouted with perseverance, with ardour, with conviction, these two by their sound alone have set whole nations in motion and upheaved the dry, hard ground on which rests our whole social fabric. There's "virtue" for you if you like! . . . Of course the accent must be attended to. The right accent. That's very important. The capacious lung, the thundering or the tender vocal chords. Don't talk to me of your Archimedes' lever.

He was an absent-minded person with a mathematical imagination. Mathematics commands all my respect, but I have no use for engines. Give me the right word and the right accent and I will move the world.

What a dream for a writer! Because written words have their accent, too. Yes! Let me only find the right word! Surely it must be lying somewhere among the wreckage of all the plaints and all the exultations poured out aloud since the first day when hope, the undying, came down on earth. It may be there, close by, disregarded, invisible, quite at hand. But it's no good. I believe there are men who can lay hold of a needle in a pottle of hay at the first try. For myself, I have never had such luck. And then there is that accent. Another difficulty. For who is going to tell whether the accent is right or wrong till the word is shouted, and fails to be heard, perhaps, and goes down-wind, leaving the world unmoved? Once upon a time there lived an emperor who was a sage and something of a literary man. He jotted down on ivory tablets thoughts, maxims, reflections which chance has preserved for the edification of posterity. Among other sayings—I am quoting from memory—I remember this solemn admonition: "Let all thy words have the accent of heroic truth." The accent of heroic truth! This is very fine, but I am thinking that it is an easy matter for an austere emperor to jot down grandiose advice. Most of the working truths on this earth are humble, not heroic; and there have been times in the history of mankind when the accents of heroic truth have moved it to nothing but derision.

Nobody will expect to find between the covers of this little book words of extraordinary potency or accents of irresistible heroism....