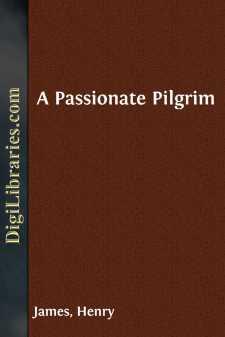 Intending to sail for America in the early part of June, I determined to spend the interval of six weeks in England, to which country my mind's eye only had as yet been introduced. I had formed in Italy and France a resolute preference for old inns, considering that what they sometimes cost the ungratified body they repay the delighted mind. On my arrival in London, therefore, I lodged at a certain antique hostelry, much to the east of Temple Bar, deep in the quarter that I had inevitably figured as the Johnsonian. Here, on the first evening of my stay, I descended to the little coffee-room and bespoke my dinner of the genius of "attendance" in the person of the solitary waiter. No sooner had I crossed the threshold of this retreat than I felt I had cut a golden-ripe crop of English "impressions." The coffee-room of the Red Lion, like so many other places and things I was destined to see in the motherland, seemed to have been waiting for long years, with just that sturdy sufferance of time written on its visage, for me to come and extract the romantic essence of it.

The latent preparedness of the American mind even for the most characteristic features of English life was a matter I meanwhile failed to get to the bottom of. The roots of it are indeed so deeply buried in the soil of our early culture that, without some great upheaval of feeling, we are at a loss to say exactly when and where and how it begins. It makes an American's enjoyment of England an emotion more searching than anything Continental. I had seen the coffee-room of the Red Lion years ago, at home—at Saragossa Illinois—in books, in visions, in dreams, in Dickens, in Smollett, in Boswell. It was small and subdivided into six narrow compartments by a series of perpendicular screens of mahogany, something higher than a man's stature, furnished on either side with a meagre uncushioned ledge, denominated in ancient Britain a seat. In each of these rigid receptacles was a narrow table—a table expected under stress to accommodate no less than four pairs of active British elbows. High pressure indeed had passed away from the Red Lion for ever. It now knew only that of memories and ghosts and atmosphere. Round the room there marched, breast-high, a magnificent panelling of mahogany, so dark with time and so polished with unremitted friction that by gazing a while into its lucid blackness I made out the dim reflexion of a party of wigged gentlemen in knee-breeches just arrived from York by the coach. On the dark yellow walls, coated by the fumes of English coal, of English mutton, of Scotch whiskey, were a dozen melancholy prints, sallow-toned with age—the Derby favourite of the year 1807, the Bank of England, her Majesty the Queen. On the floor was a Turkey carpet—as old as the mahogany almost, as the Bank of England, as the Queen—into which the waiter had in his lonely revolutions trodden so many massive soot-flakes and drops of overflowing beer that the glowing looms of Smyrna would certainly not have recognised it....