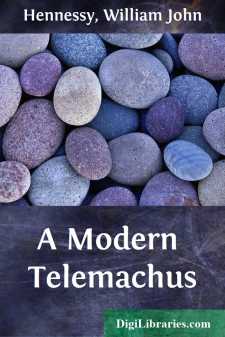 The idea of this tale was taken from The Mariners’ Chronicle, compiled by a person named Scott early in the last century—a curious book of narratives of maritime adventures, with exceedingly quaint illustrations.  Nothing has ever shown me more plainly that truth is stranger than fiction, for all that is most improbable here is the actual fact.

The Comte de Bourke was really an Irish Jacobite, naturalised in France, and married to the daughter of the Marquis de Varennes, as well as in high favour with the Marshal Duke of Berwick.

In 1719, just when the ambition of Elizabeth Farnese, the second wife of Philip V. of Spain, had involved that country in a war with England, France, and Austria, the Count was transferred from the Spanish Embassy to that of Sweden, and sent for his wife and two elder children to join him at a Spanish port.

This arrangement was so strange that I can only account for it by supposing that as this was the date of a feeble Spanish attempt on behalf of the Jacobites in Scotland, Comte de Bourke may not have ventured by the direct route.  Or it may not have been etiquette for him to re-enter France when appointed ambassador.  At any rate, the poor Countess did take this route to the South, and I am inclined to think the narrative must be correct, as all the side-lights I have been able to gain perfectly agree with it, often in an unexpected manner.

The suite and the baggage were just as related in the story—the only liberty I have taken being the bestowal of names.  ‘M. Arture’ was really of the party, but I have made him Scotch instead of Irish, and I have no knowledge that the lackey was not French.  The imbecility of the Abbé is merely a deduction from his helplessness, but of course this may have been caused by illness.

The meeting with M. de Varennes at Avignon, Berwick’s offer of an escort, and the Countess’s dread of the Pyrenees, are all facts, as well as her embarkation in the Genoese tartane bound for Barcelona, and its capture by the Algerine corsair commanded by a Dutch renegade, who treated her well, and to whom she gave her watch.

Algerine history confirms what is said of his treatment.  Louis XIV. had bombarded the pirate city, and compelled the Dey to receive a consul and to liberate French prisoners and French property; but the lady having been taken in an Italian ship, the Dutchman was afraid to set her ashore without first taking her to Algiers, lest he should fall under suspicion.  He would not venture on taking so many women on board his own vessel, being evidently afraid of his crew of more than two hundred Turks and Moors, but sent seven men on board the prize and took it in tow.

Curiously enough, history mentions the very tempest which drove the tartane apart from her captor, for it also shattered the French transports and interfered with Berwick’s Spanish campaign.

The circumstances of the wreck have been closely followed.  ‘M. Arture’ actually saved Mademoiselle de Bourke, and placed her in the arms of the maître d’hôtel, who had reached a rock, together with the Abbé, the lackey, and one out of the four maids.  The other three were all in the cabin with their mistress and her son, and shared their fate....