A Man of Business 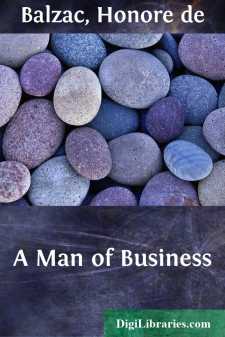 A MAN OF BUSINESS

The word lorette is a euphemism invented to describe the status of a personage, or a personage of a status, of which it is awkward to speak; the French Academie, in its modesty, having omitted to supply a definition out of regard for the age of its forty members. Whenever a new word comes to supply the place of an unwieldy circumlocution, its fortune is assured; the word lorette has passed into the language of every class of society, even where the lorette herself will never gain an entrance. It was only invented in 1840, and derived beyond a doubt from the agglomeration of such swallows' nests about the Church of Our Lady of Loretto. This information is for etymoligists only. Those gentlemen would not be so often in a quandary if mediaeval writers had only taken such pains with details of contemporary manners as we take in these days of analysis and description.

Mlle. Turquet, or Malaga, for she is better known by her pseudonym (See La fausse Maitresse.), was one of the earliest parishioners of that charming church. At the time to which this story belongs, that lighthearted and lively damsel gladdened the existence of a notary with a wife somewhat too bigoted, rigid, and frigid for domestic happiness.

Now, it so fell out that one Carnival evening Maitre Cardot was entertaining guests at Mlle. Turquet's house—Desroches the attorney, Bixiou of the caricatures, Lousteau the journalist, Nathan, and others; it is quite unnecessary to give any further description of these personages, all bearers of illustrious names in the Comedie Humaine. Young La Palferine, in spite of his title of Count and his great descent, which, alas! means a great descent in fortune likewise, had honored the notary's little establishment with his presence.

At dinner, in such a house, one does not expect to meet the patriarchal beef, the skinny fowl and salad of domestic and family life, nor is there any attempt at the hypocritical conversation of drawing-rooms furnished with highly respectable matrons. When, alas! will respectability be charming? When will the women in good society vouchsafe to show rather less of their shoulders and rather more wit or geniality? Marguerite Turquet, the Aspasia of the Cirque-Olympique, is one of those frank, very living personalities to whom all is forgiven, such unconscious sinners are they, such intelligent penitents; of such as Malaga one might ask, like Cardot—a witty man enough, albeit a notary—to be well "deceived." And yet you must not think that any enormities were committed. Desroches and Cardot were good fellows grown too gray in the profession not to feel at ease with Bixiou, Lousteau, Nathan, and young La Palferine. And they on their side had too often had recourse to their legal advisers, and knew them too well to try to "draw them out," in lorette language.

Conversation, perfumed with seven cigars, at first was as fantastic as a kid let loose, but finally it settled down upon the strategy of the constant war waged in Paris between creditors and debtors....