A Maid of the Silver Sea 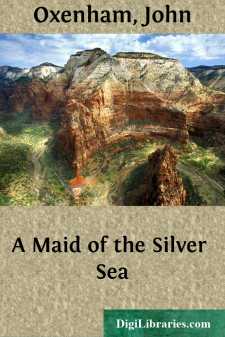 HOW TWO LAY IN A CLEFT

A girl and a boy lay in a cubby-hole in the north side of the cliff overlooking Port Gorey, and watched the goings-on down below.

The sun was tending towards Guernsey and the gulf was filled witn golden light. A small brig, unkempt and dirty, was nosing towards the rough wooden landing-stage clamped to the opposite rocks, as though doubtful of the advisability of attempting its closer acquaintance.

"Mon Gyu, Bern, how I wish they were all at the bottom of the sea!" said the girl vehemently.

"Whe—e—e—w!" whistled the boy, and then with a twinkle in his eye,—"Who's got a new parasol now?"

"Everybody!—but it's not that. It's the bustle—and the dirt—and the noise—and oh—everything! You can't remember what it was like before these wretched mines came—no dust, no noise, no bustle, no dirty men, no silly women, no nothing as it is now. Just Sark as it used to be. And now—! Mon Gyu, yes I wish the sea would break in through their nasty tunnels and wash them all away—pumps and engines and houses—everything!"

And up on the hillside at the head of the gulf the great pumping-engine clacked monotonously "Never! Never! Never!"

"I've always got it bad. It makes me sick. It has changed everything and everybody—everybody except mother and you," she added quickly. "Get—get—get! Why we hardly used to know what money was, and now no one thinks of anything but getting all they can. It is sickening."

"S—s—s—s—t!" signalled the boy suddenly, at the sound of steps and voices on the cliff outside and close at hand.

"And Peter Mauger," murmured the girl, and they both shrank lower into their hiding-place.

It was a tiny natural chamber in the sharp slope of the hill. Ages ago the massive granite boulders of the headland, loosened and undercut by the ceaseless assaults of wind and weather and the deadly quiet fingers of the frost, had come rolling down the slope till they settled afresh on new foundations, forming holes and crannies and little angular chambers where the splintered shoulders met. In time, the soil silted down and covered their asperities, and—like a good colonist—carrying in itself the means of increase, it presently brought forth and blossomed, and the erstwhile shattered rocks were royally robed in russet and purple, and green and gold.

Among these fantastic little chambers Nance had played as a child, and had found refuge in them from the persecutions of her big half-brother, Tom Hamon. Tom was six when she was born—fourteen accordingly when she was at the teasable age of eight, and unusually tempting as a victim by reason of her passionate resentment of his unwelcome attentions.

She hated Tom, and Tom had always resented her and her mother's intrusion into the family, and Bernel's, when he came, four years after Nance.

What his father wanted to marry again for, Tom never could make out. His lack of training and limited powers of expression did not indeed permit him any distinct reasoning on the matter, but the feeling was there—a dull resentment which found its only vent and satisfaction in stolid rudeness to his stepmother and the persecution of Nance and Bernel whenever occasion offered....