A Little Rebel A Novel 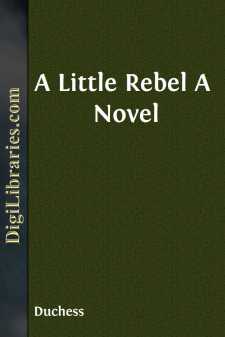 "Perplex'd in the extreme." "The memory of past favors is like a rainbow, bright, vivid andbeautiful."

The professor, sitting before his untasted breakfast, is looking the very picture of dismay. Two letters lie before him; one is in his hand, the other is on the table-cloth. Both are open; but of one, the opening lines—that tell of the death of his old friend—are all he has read; whereas he has read the other from start to finish, already three times. It is from the old friend himself, written a week before his death, and very urgent and very pleading. The professor has mastered its contents with ever-increasing consternation.

Indeed so great a revolution has it created in his mind, that his face—(the index of that excellent part of him)—has, for the moment, undergone a complete change. Any ordinary acquaintance now entering the professor's rooms (and those acquaintances might be whittled down to quite a little few), would hardly have known him. For the abstraction that, as a rule, characterizes his features—the way he has of looking at you, as if he doesn't see you, that harasses the simple, and enrages the others—is all gone! Not a trace of it remains. It has given place to terror, open and unrestrained.

"A girl!" murmurs he in a feeble tone, falling back in his chair. And then again, in a louder tone of dismay—"A girl!" He pauses again, and now again gives way to the fear that is destroying him—"A grown girl!"

After this, he seems too overcome to continue his reflections, so goes back to the fatal letter. Every now and then, a groan escapes him, mingled with mournful remarks, and extracts from the sheet in his hand—

"Poor old Wynter! Gone at last!" staring at the shaking signature at the end of the letter that speaks so plainly of the coming icy clutch that should prevent the poor hand from forming ever again even such sadly erratic characters as these. "At least," glancing at the half-read letter on the cloth—"this tells me so. His solicitor's, I suppose. Though what Wynter could want with a solicitor——Poor old fellow! He was often very good to me in the old days. I don't believe I should have done even as much as I have done, without him.... It must be fully ten years since he threw up his work here and went to Australia! ... ten years. The girl must have been born before he went,"—glances at letter—"'My child, my beloved Perpetua, the one thing on earth I love, will be left entirely alone. Her mother died nine years ago. She is only seventeen, and the world lies before her, and never a soul in it to care how it goes with her. I entrust her to you—(a groan). To you I give her. Knowing that if you are living, dear fellow, you will not desert me in my great need, but will do what you can for my little one.'"

"But what is that?" demands the professor, distractedly. He pushes his spectacles up to the top of his head, and then drags them down again, and casts them wildly into the sugar-bowl. "What on earth am I to do with a girl of seventeen?...