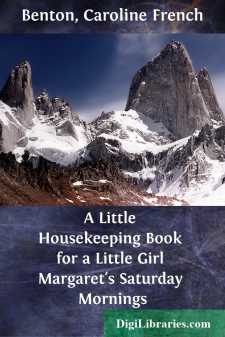 About Christmas time Margaret was accustomed to see things tucked out of sight whenever she came around, and her feelings were never hurt when her Pretty Aunt, or her Other Aunt, or her mother, or her grandmother said: "Don't you want to run down-stairs a little while, dear!" or, "Margaret, would you mind staying out of the sitting-room all this morning?" But this Christmas everybody said these things twice as often as usual, and Margaret wondered about it.

"Mother," she said one day, "if you were a little girl and every one said 'Run away, now,' over and over, twice as many times as other Christmases, what would you think?"

Her mother laughed. "Well," she said, "I suppose I should think I was going to have twice as many presents as usual."

Margaret drew a long breath. "Would you?" she asked, thoughtfully. "Two pairs of skates, and two sets of furs, and two boxes of handkerchiefs, and two pink kimonos, and six books; that would be twice as many presents as last year. But what does one little girl want with twos? Now if I was twins—"

The Pretty Aunt laughed. "Let me explain it to her," she said. "Margaret, how would you like two Christmas trees, one for everybody, just as usual, with your presents on it, and one little tree, all for yourself, with more presents? Would you like that for a change?"

Margaret said she thought she would, but it seemed very queer. Two trees, and only one little girl! Now if she really had been twins—

"Twins, indeed!" said the Other Aunt.

"Just wait till you see, and perhaps you will be glad there's only one of you!" And everybody laughed again except Margaret, who thought it all very queer indeed.

When Christmas morning came she jumped up in a hurry and waked every one up calling out, "Merry Christmas!" and then she danced with impatience because it took them so long to get ready. But at last the doors of the parlor were thrown open and she rushed in. There stood the great, beautiful tree, hung with tinsel and bright balls, and twinkling with beautiful lights, and on its branches were bundles and bundles, tied with red ribbons and holly, and on the floor were more bundles, and she forgot about the little tree she had meant to look for. But by and by, when she had opened all her presents, and made a pile of them on the piano, and thanked everybody for them, she whispered:

"Mother, was there to be a little tree, all for me?"

"Why, of course," said her mother, smiling, "we nearly forgot, didn't we? Suppose you look behind the library door?"

Margaret ran and looked, and, sure enough, there was the tree, but such a queer one! It was small, and had no candles and no ornaments. The corner was dark and she could not see very well, but it seemed to be hung with things that looked like dust-pans and whisk-brooms. She stood looking at it, wondering if it was all a joke.

Just then her father saw her and came to pull the tree out where she could see it, and, sure enough, there was a dust-pan tied on with a red tape, and a whisk-broom with another red tape, and a little sweeping-cap with a red bow, some gingham aprons and white aprons, and brown towels and red-and-white towels, and dust-cloths, all with red M's in their corners; and put at the top was a little book tied on the tree with a big red bow....