A Letter to a Hindu 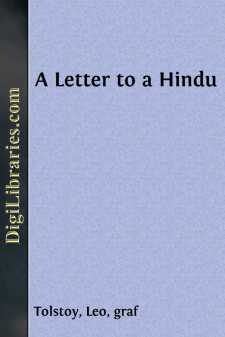 The letter printed below is a translation of Tolstoy's letter written in Russian in reply to one from the Editor of Free Hindustan. After having passed from hand to hand, this letter at last came into my possession through a friend who asked me, as one much interested in Tolstoy's writings, whether I thought it worth publishing. I at once replied in the affirmative, and told him I should translate it myself into Gujarati and induce others' to translate and publish it in various Indian vernaculars.

The letter as received by me was a type-written copy. It was therefore referred to the author, who confirmed it as his and kindly granted me permission to print it.

To me, as a humble follower of that great teacher whom I have long looked upon as one of my guides, it is a matter of honour to be connected with the publication of his letter, such especially as the one which is now being given to the world.

It is a mere statement of fact to say that every Indian, whether he owns up to it or not, has national aspirations. But there are as many opinions as there are Indian nationalists as to the exact meaning of that aspiration, and more especially as to the methods to be used to attain the end.

One of the accepted and 'time-honoured' methods to attain the end is that of violence. The assassination of Sir Curzon Wylie was an illustration of that method in its worst and most detestable form. Tolstoy's life has been devoted to replacing the method of violence for removing tyranny or securing reform by the method of non-resistance to evil. He would meet hatred expressed in violence by love expressed in self-suffering. He admits of no exception to whittle down this great and divine law of love. He applies it to all the problems that trouble mankind.

When a man like Tolstoy, one of the clearest thinkers in the western world, one of the greatest writers, one who as a soldier has known what violence is and what it can do, condemns Japan for having blindly followed the law of modern science, falsely so-called, and fears for that country 'the greatest calamities', it is for us to pause and consider whether, in our impatience of English rule, we do not want to replace one evil by another and a worse. India, which is the nursery of the great faiths of the world, will cease to be nationalist India, whatever else she may become, when she goes through the process of civilization in the shape of reproduction on that sacred soil of gun factories and the hateful industrialism which has reduced the people of Europe to a state of slavery, and all but stifled among them the best instincts which are the heritage of the human family.

If we do not want the English in India we must pay the price. Tolstoy indicates it. 'Do not resist evil, but also do not yourselves participate in evil—in the violent deeds of the administration of the law courts, the collection of taxes and, what is more important, of the soldiers, and no one in the world will enslave you', passionately declares the sage of Yasnaya Polyana....