A History of the French Novel, Vol. 2 To the Close of the 19th Century 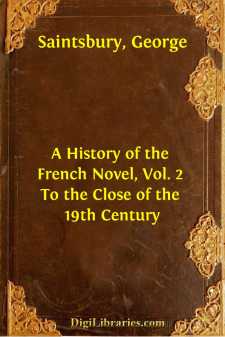 "The second chantry" (for it would be absurd to keep "temple") of this work "is not like the first"; in one respect especially, which seems to deserve notice in its Preface or porch—if a chantry may be permitted a porch. In Volume I.—though many of its subjects (not quite all) had been handled by me before in more or less summary fashion, or in reviews of individual books, or in other connections than that of the novel—only Hamilton, Lesage, Marivaux, and the minor "Sensibility" men and women had formed the subjects of separate and somewhat detailed studies, wholly or mainly as novelists. The case is altered in respect of the present volume. The Essays on French Novelists, to which I there referred, contain a larger number of such studies appertaining to the present division—studies busied with Charles de Bernard, Gautier, Murger, Flaubert, Dumas, Sandeau, Cherbuliez, Feuillet. On Balzac I have previously written two papers of some length, one as an Introduction to Messrs. Dent's almost complete translation of the Comédie, with shorter sequels for each book, the other an article in the Quarterly Review for 1907. Some dozen or more years ago I contributed to an American edition of translations of Mérimée by various hands, a long "Introduction" to that most remarkable writer, and I had, somewhat earlier, written on Maupassant for the Fortnightly Review. One or two additional dealings of some substance with the subject might be mentioned, such as another Introduction to Corinne, but not to Delphine. These, however, and passages in more general Histories, hardly need specification.

On the other hand, I have never dealt, substantively and in detail, with Chateaubriand, Paul de Kock, Victor Hugo, Beyle, George Sand, or Zola as novelists, nor with any of the very large number of minors not already mentioned, including some, such as Nodier and Gérard de Nerval, whom, for one thing or another, I should myself very decidedly put above minority. And, further, my former dealings with the authors in the first list given above having been undertaken without any view to a general history of the French novel, it became not merely proper but easy for me to "triangulate" them anew. So that though there may be more previous work of mine in print on the subjects of the present volume than on those of the last, there will, I hope, be found here actually less, and very considerably less, réchauffé—hardly any, in fact (save a few translations and some passages on Gautier and Maupassant)—of the amount and character which seemed excusable, and more than excusable, in the case of the "Sensibility" chapter there. The book, if not actually a "Pisgah-sight reversed," taken from Lebanon instead of Pisgah after more than forty years' journey, not in the wilderness, but in the Promised Land itself, attempts to be so; and uses no more than fairly "reminiscential" (as Sir Thomas Browne would say) notes, taken on that journey itself.

It was very naturally, and by persons of weight, put to me whether I could not extend this history to, or nearer to, the present day....