A History of the French Novel, Vol. 1 From the Beginning to 1800 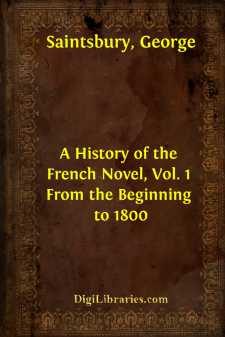 In beginning what, if it ever gets finished, must in all probability be the last of some already perhaps too numerous studies of literary history, I should like to point out that the plan of it is somewhat different from that of most, if not all, of its predecessors. I have usually gone on the principle (which I still think a sound one) that, in studying the literature of a country, or in dealing with such general characteristics of parts of literature as prosody, or such coefficients of all literature as criticism, minorities are, sometimes at least, of as much importance as majorities, and that to omit them altogether is to risk, or rather to assure, an imperfect—and dangerously imperfect—product.

In the present instance, however, I am attempting something that I have never, at such length, attempted before—the history of a Kind, and a Kind which has distinguished itself, as few others have done, by communicating to readers the pleasure of literature. I might almost say that it is the history of that pleasure, quite as much as the history of the kind itself, that I wish to trace. In doing so it is obviously superfluous to include inferiorities and failures, unless they have some very special lesson or interest, or have been (as in the case of the minorities on the bridge of the sixteenth and seventeenth centuries) for the most part, and unduly, neglected, though they are important as experiments and links. We really do want here—what the reprehensible hedonism of Mr. Matthew Arnold, and his submission to what some one has called "the eternal enemy, Caprice," wanted in all cases—"only the chief and principal things." I wish to give a full history of how what is commonly called the French Novel came into being and kept itself in being; but I do not wish to give an exhaustive, though I hope to give a pretty full, account of its practitioners.

In another point, however, I have kept to my old ways, and that is the way of beginning at the beginning. I disagree utterly with any Balbus who would build an absolute wall between romance and novel, or a wall hardly less absolute between verse- and prose-fiction. I think the French have (what is not common in their language) an advantage over us in possessing the general term Roman, and I have perhaps taken a certain liberty with my own title in order to keep the noun-part of it to a single word. I shall extend the meaning of "novel"—that of roman would need no extension—to include, not only the prose books, old and new, which are more generally called "romance," but the verse romances of the earlier period.

The subject is one with which I can at least plead almost lifelong familiarity. I became a subscriber to "Rolandi's," I think, during my holidays as a senior schoolboy, and continued the subscriptions during my vacations when I was at Oxford. In the very considerable leisure which I enjoyed during the six years when I was Classical Master at Elizabeth College, Guernsey, I read more French than any other literature, and more novels than anything else in French....