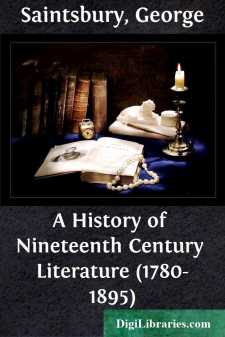 In the execution of the present task (which I took over about two years ago from hands worthier than mine, but then more occupied) some difficulties of necessity occurred which did not present themselves to myself when I undertook the volume of Elizabethan Literature, or to my immediate predecessor in grappling with the period between 1660 and 1780.

The most obvious and serious of these was the question, "What should be done with living authors?" Independently of certain perils of selection and exclusion, of proportion and of freedom of speech, I believe it will be recognised by every one who has ever attempted it, that to mix estimates of work which is done and of work which is unfinished is to the last degree unsatisfactory. I therefore resolved to include no living writer, except Mr. Ruskin, in this volume for the purpose of detailed criticism, though some may be now and then mentioned in passing.

Even with this limitation the task remained a rather formidable one. Those who are least disposed to overvalue literary work in proportion as it approaches their own time will still acknowledge that the last hundred and fifteen years are fuller furnished than either of the periods of not very dissimilar length which have been already dealt with. The proportion of names of the first, or of a very high second class, is distinctly larger than in the eighteenth century; the bulk of literary production is infinitely greater than in the Elizabethan time. Further, save in regard to the earliest subsections of this period, Time has not performed his office, beneficent to the reader but more beneficent to the historian, of sifting and riddling out writers whom it is no longer necessary to consider, save in a spirit of adventurous or affectionate antiquarianism. I must ask the reader to believe me when I say that many who do not appear here at all, or who are dismissed in a few lines, have yet been the subjects of careful reading on my part. If some exclusions (not due to mere oversight) appear arbitrary or unjust, I would urge that this is not a Dictionary of Authors, nor a Catalogue of Books, but a History of Literature; and that to mention everybody is as impossible as to say everything. As I have revised the sheets the old query has recurred to myself only too often, and sometimes in reference to very favourite books and authors of my own. Where, it may be asked, is Kenelm Digby and the Broad Stone of Honour? Where Sir Richard Burton (as great a contrast to Digby as can well be imagined)? Where Laurence Oliphant, who, but the other day, seemed to many clever men the cleverest man they knew? Where John Foster, who provided food for the thoughtful public two generations ago? Where Greville of the caustic diaries, and his editor (latest deceased) Mr. Reeve, and Crabb Robinson, and many others? Some of these and others are really neiges d'antan; some baffle the historian in miniature by being rebels to brief and exact characterisation; some, nay many, are simply crowded out.

I must also ask pardon for having exercised apparently arbitrary discretion in alternately separating the work of the same writer under different chapter-headings, and grouping it with a certain disregard of the strict limits of the chapter-heading itself....