A History of English Romanticism in the Eighteenth Century 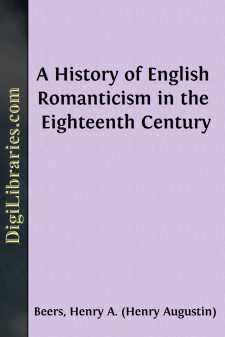 To attempt at the outset a rigid definition of the word romanticism would be to anticipate the substance of this volume. To furnish an answer to the question—What is, or was, romanticism? or, at least, What is, or was English romanticism?—is one of my main purposes herein, and the reader will be invited to examine a good many literary documents, and to do a certain amount of thinking, before he can form for himself any full and clear notion of the thing. Even then he will hardly find himself prepared to give a dictionary definition or romanticism. There are words which connote so much, which take up into themselves so much of the history of the human mind, that any compendious explanation of their meaning—any definition which is not, at the same time, a rather extended description—must serve little other end than to supply a convenient mark of identification. How can we define in a sentence words like renaissance, philistine, sentimentalism, transcendental, Bohemia, pre-Raphaelite, impressionist, realistic? Definitio est negatio. It may be possible to hit upon a form of words which will mark romanticism off from everything else—tell in a clause what it is not; but to add a positive content to the definition—to tell what romanticism is, will require a very different and more gradual process.[1]

Nevertheless a rough, working definition may be useful to start with. Romanticism, then, in the sense in which I shall commonly employ the word, means the reproduction in modern art or literature of the life and thought of the Middle Ages. Some other elements will have to be added to this definition, and some modifications of it will suggest themselves from time to time. It is provisional, tentative, classic, but will serve our turn till we are ready to substitute a better. It is the definition which Heine gives in his brilliant little book on the Romantic School in Germany.[2] "All the poetry of the Middle Ages," he adds, "has a certain definite character, through which it differs from the poetry of the Greeks and Romans. In reference to this difference, the former is called Romantic, the latter Classic. These names, however, are misleading, and have hitherto caused the most vexatious confusion."[3]

Some of the sources of this confusion will be considered presently. Meanwhile the passage recalls the fact that romantic, when used as a term in literary nomenclature, is not an independent, but a referential word. It implies its opposite, the classic; and the ingenuity of critics has been taxed to its uttermost to explain and develop the numerous points of contrast. To form a thorough conception of the romantic, therefore, we must also form some conception of the classic. Now there is an obvious unlikeness between the thought and art of the nations of pagan antiquity and the thought and art of the peoples of Christian, feudal Europe. Everyone will agree to call the Parthenon, the "Diana" of the Louvre, the "Oedipus" of Sophocles, the orations of Demosthenes classical; and to call the cathedral of Chartres, the walls of Nuremberg—die Perle des Mittelalters—the "Legenda Aurea" of Jacobus de Voragine, the "Tristan und Isolde" of Gottfried of Strasburg, and the illuminations in a Catholic missal of the thirteenth century romantic....