A History of Elizabethan Literature 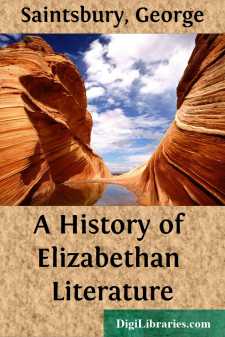 As was explained in the Note to the Preface of the previous editions and impressions of this book, after the first, hardly one of them appeared without careful revision, and the insertion of a more or less considerable number of additions and corrections. I found, indeed, few errors of a kind that need have seemed serious except to Momus or Zoilus. But in the enormous number of statements of fact which literary history of the more exact kind requires, minor blunders, be they more or fewer, are sure to creep in. No writer, again, who endeavours constantly to keep up and extend his knowledge of such a subject as Elizabethan literature, can fail to have something new to say from time to time. And though no one who is competent originally for his task ought to experience any violent changes of view, any one's views may undergo modification. In particular, he may find that readers have misunderstood him, and that alterations of expression are desirable. For all these reasons and others I have not spared trouble in the various revisions referred to; I think the book has been kept by them fairly abreast of its author's knowledge, and I hope it is not too far behind that of others.

It will, however, almost inevitably happen that a long series of piecemeal corrections and codicils somewhat disfigures the character of the composition as a whole. And after nearly the full score of years, and not much less than half a score of re-appearances, it has seemed to me desirable to make a somewhat more thorough, minute, and above all connected revision than I have ever made before. And so, my publishers falling in with this view, the present edition represents the result. I do not think it necessary to reprint the original preface. When I wrote it I had already had some, and since I wrote it I have had much more, experience in writing literary history. I have never seen reason to alter the opinion that, to make such history of any value at all, the critical judgments and descriptions must represent direct, original, and first-hand reading and thought; and that in these critical judgments and descriptions the value of it consists. Even summaries and analyses of the matter of books, except in so far as they are necessary to criticism, come far second; while biographical and bibliographical details are of much less importance, and may (as indeed in one way or another they generally must) be taken at second hand. The completion of the Dictionary of National Biography has at once facilitated the task of the writer, and to a great extent disarmed the candid critic who delights, in cases of disputed date, to assume that the date which his author chooses is the wrong one. And I have in the main adjusted the dates in this book (where necessary) accordingly. The bibliographical additions which have been made to the Index will be found not inconsiderable.

I believe that, in my present plan, there is no author of importance omitted (there were not many even in the first edition), and that I have been able somewhat to improve the book from the results of twenty years' additional study, twelve of which have been mainly devoted to English literature. How far it must still be from being worthy of its subject, nobody can know better than I do. But I know also, and I am very happy to know, that, as an Elizabethan himself might have said, my unworthiness has guided many worthy ones to something like knowledge, and to what is more important than knowledge, love, of a subject so fascinating and so magnificent. And that the book may still have the chance of doing this, I hope to spare no trouble upon it as often as the opportunity presents itself.

In the last (eleventh) re-impression no alterations seemed necessary. In this, one or two bibliographical matters may call for notice. Every student of Donne should now consult Professor Grierson's edition of the Poems (2 vols., Oxford, 1912), and as inquiries have been made as to the third volume of my own Caroline Poets (see Index), containing Cleveland, King, Stanley, and some less known authors, I may be permitted to say that it has been in the press for years, and a large part of it is completed....