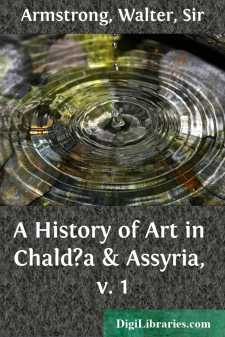 THE GENERAL CHARACTERISTICS OF CHALDÆO-ASSYRIAN CIVILIZATION.

§ 1.—Situation and Boundaries of Chaldæa and Assyria.

The primitive civilization of Chaldæa, like that of Egypt, was cradled in the lower districts of a great alluvial basin, in which the soil was stolen from the sea by long continued deposits of river mud. In the valley of the Tigris and Euphrates, as in that of the Nile, it was in the great plains near the ocean that the inhabitants first emerged from barbarism and organized a civil life. As the ages passed away, this culture slowly mounted the streams, and, as Memphis was older by many centuries than Thebes, in dignity if not in actual existence, so Ur and Larsam were older than Babylon, and Babylon than Nineveh. The manners and beliefs, the arts and the written characters of Egypt were carried into the farthest recesses of Ethiopia, partly by commerce but still more by military invasion; so too Chaldaic civilization made itself felt at vast distances from its birthplace, even in the cold valleys and snowy plateaux of Armenia, in districts which are separated by ten degrees of latitude from the burning shores where the fish god Oannes showed himself to the rude fathers of the race, and taught them "such things as contribute to the softening of life." In Egypt progressive development took place from north to south, while in Chaldæa its direction was reversed. The apparent contrast is, however, but a resemblance the more. The orientation, if such a term may be used, of the two basins, is in opposite directions, but in each the spread of religion with its rites and symbols, of written characters with their adaptation to different languages, and of all those arts and processes which, when taken together, make up what we call civilization, advanced from the seaboard to the river springs.

In these two countries the conscience of man seems to have been first awakened to his innate power of bettering his own condition by well directed observation, by the elaboration of laws, and by forethought for the future. Between Egypt on the one hand, and Chaldæa with that Assyria which was no more than its offshoot and prolongation, on the other, there are strong analogies, as will be clearly seen in the course of our study, but there are also differences that are not less appreciable. Professor Rawlinson shows this very clearly in a page of descriptive geography which he will allow us to quote as it stands. It will not be the last of our borrowings from his excellent work, The Five Great Monarchies of the Ancient Eastern World, a book that has done so much to popularize the discoveries of modern scholars.

"The broad belt of desert which traverses the eastern hemisphere, in a general direction from west to east (or, speaking more exactly, of W.S.W. to N.E.E.) reaching from the Atlantic on the one hand nearly to the Yellow Sea on the other, is interrupted about its centre by a strip of rich vegetation, which at once breaks the continuity of the arid region, and serves also to mark the point where the desert changes its character from that of a plain at a low level to that of an elevated plateau or table-land....