A Group of Noble Dames 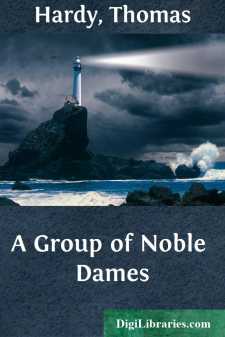 King’s-Hintock Court (said the narrator, turning over his memoranda for reference)—King’s-Hintock Court is, as we know, one of the most imposing of the mansions that overlook our beautiful Blackmoor or Blakemore Vale.  On the particular occasion of which I have to speak this building stood, as it had often stood before, in the perfect silence of a calm clear night, lighted only by the cold shine of the stars.  The season was winter, in days long ago, the last century having run but little more than a third of its length.  North, south, and west, not a casement was unfastened, not a curtain undrawn; eastward, one window on the upper floor was open, and a girl of twelve or thirteen was leaning over the sill.  That she had not taken up the position for purposes of observation was apparent at a glance, for she kept her eyes covered with her hands.

The room occupied by the girl was an inner one of a suite, to be reached only by passing through a large bedchamber adjoining.  From this apartment voices in altercation were audible, everything else in the building being so still.  It was to avoid listening to these voices that the girl had left her little cot, thrown a cloak round her head and shoulders, and stretched into the night air.

But she could not escape the conversation, try as she would.  The words reached her in all their painfulness, one sentence in masculine tones, those of her father, being repeated many times.

She knew the subject of dispute to be herself.  A cool feminine voice, her mother’s, replied:

‘Have done with you, and be wise.  He is willing to wait a good five or six years before the marriage takes place, and there’s not a man in the county to compare with him.’

‘It shall not be!  He is over thirty.  It is wickedness.’

‘He is just thirty, and the best and finest man alive—a perfect match for her.’

‘But his father and elder brothers are made much of at Court—none so constantly at the palace as they; and with her fortune, who knows?  He may be able to get a barony.’

‘I believe you are in love with en yourself!’

‘How can you insult me so, Thomas!  And is it not monstrous for you to talk of my wickedness when you have a like scheme in your own head?  You know you have.  Some bumpkin of your own choosing—some petty gentleman who lives down at that outlandish place of yours, Falls-Park—one of your pot-companions’ sons—’

There was an outburst of imprecation on the part of her husband in lieu of further argument.  As soon as he could utter a connected sentence he said: ‘You crow and you domineer, mistress, because you are heiress-general here.  You are in your own house; you are on your own land.  But let me tell ’ee that if I did come here to you instead of taking you to me, it was done at the dictates of convenience merely.  H---!  I’m no beggar!  Ha’n’t I a place of my own?  Ha’n’t I an avenue as long as thine?  Ha’n’t I beeches that will more than match thy oaks?  I should have lived in my own quiet house and land, contented, if you had not called me off with your airs and graces.  Faith, I’ll go back there; I’ll not stay with thee longer!  If it had not been for our Betty I should have gone long ago!’

After this there were no more words; but presently, hearing the sound of a door opening and shutting below, the girl again looked from the window.  Footsteps crunched on the gravel-walk, and a shape in a drab greatcoat, easily distinguishable as her father, withdrew from the house.  He moved to the left, and she watched him diminish down the long east front till he had turned the corner and vanished.  He must have gone round to the stables.

She closed the window and shrank into bed, where she cried herself to sleep.  This child, their only one, Betty, beloved ambitiously by her mother, and with uncalculating passionateness by her father, was frequently made wretched by such episodes as this; though she was too young to care very deeply, for her own sake, whether her mother betrothed her to the gentleman discussed or not....