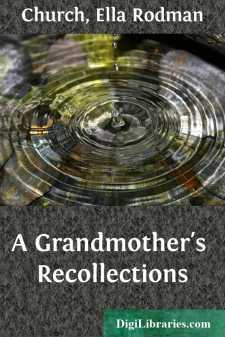 The best bed-chamber, with its hangings of crimson moreen, was opened and aired—a performance which always caused my eight little brothers and sisters to place themselves in convenient positions for being stumbled over, to the great annoyance of industrious damsels, who, armed with broom and duster, endeavored to render their reign as arbitrary as it was short. For some time past, the nursery-maids had invariably silenced refractory children with "Fie, Miss Matilda! Your grandmother will make you behave yourself—she won't allow such doings, I'll be bound!" or "Aren't you ashamed of yourself, Master Clarence? What will your grandmother say to that!" The nursery was in a state of uproar on the day of my venerable relative's arrival; for the children almost expected to see, in their grandmother, an ogress, both in features and disposition.

My mother was the eldest of two children, and my grandmother, from the period of my infancy, had resided in England with her youngest daughter; and we were now all employed in wondering what sort of a person our relative might be. Mamma informed us that the old lady was extremely dignified, and exacted respect and attention from all around; she also hinted, at the same time, that it would be well for me to lay aside a little of my self-sufficiency, and accommodate myself to the humors of my grandmother. This to me!--to me, whose temper was so inflammable that the least inadvertent touch was sufficient to set it in a blaze—it was too much! So, like a well-disposed young lady, I very properly resolved that mine should not be the arm to support the venerable Mrs. Arlington in her daily walks; that should the children playfully ornament the cushion of her easy-chair with pins, I would not turn informant; and should a conspiracy be on foot to burn the old lady's best wig, I entertained serious thoughts of helping along myself.

In the meantime, like all selfish persons, I considered what demeanor I should assume, in order to impress my grandmother with a conviction of my own consequence. Of course, dignified and unbending I would be; but what if she chose to consider me a child, and treat me accordingly? The idea was agonizing to my feelings; but then I proudly surveyed my five feet two inches of height, and wondered how I could have thought of such a thing! Still I had sense enough to know that such a supposition would never have entered my head, had there not been sufficient grounds for it; and, with no small trepidation, I prepared for my first appearance.

It went off as first appearances generally do. I was to have been seated in an attitude of great elegance, with my eyes fixed on the pages of some wonderfully wise book, but my thoughts anywhere but in company with my eyes; while, to give more dignity to a girlish figure, my hair was to be turned up on the very top of my head with a huge shell comb, borrowed for the occasion from mamma's drawer. Upon my grandmother's entrance, I intended to rise and make her a very stiff courtesy, and then deliver a series of womanish remarks....