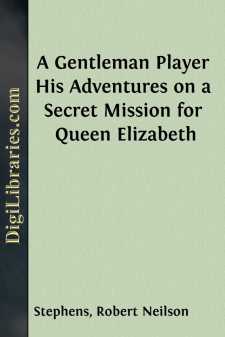 "Who ever loved that loved not at first sight?"—Quoted in "As You Like It," from Marlowe's "Hero and Leander."

At three o'clock in the afternoon of the cold first Monday in March, 1601, a red flag rose, and a trumpet sounded thrice, from a little gabled turret protruding up out of a large wooden building in a field in that part of Southwark known as the Bankside and bordering on the Thames west of London Bridge. This rude edifice, or enclosure, was round (not like its successor, hexagonal) in shape; was in great part roofless; was built on a brick and stone foundation, and was encircled by a ditch for drainage. It was, in fact, the Globe Theatre; and the flag and trumpet meant that the "Lord Chamberlain's servants" were about to begin their performance, which, as the bill outside the door told in rough letters, was to be that of a new "Tragicall Historie of Hamlet Prince of Denmark," written by William Shakespeare. London folk knew this Master Shakespeare well as one of the aforesaid "servants," as the maker of most of the plays enacted now by those servants, and, which was deemed far more to his honor, as the poet of "Venus and Adonis" and "The Rape of Lucrece." Many who read the playbill guessed rightly that the new "tragicall historie" was based in part upon another author's old play, which they had seen performed many times in the past.

The audience, in all colours and qualities of doublet and hose, ruff and cloak, feathered hat and plain cap and scholar's coif, had awaited noisily the parting of the worsted curtains of the stage projecting from one side of the circular interior of the barnlike playhouse. Around the other sides were wooden galleries, and under these was a raised platform divided into boxes called "rooms," whose fronts were hung with painted cloth. The stage and the actors' tiring-room behind it were under a roof of thatch. The boxes had the galleries for cover. But the great central O-shaped space, known as the "yard," where self-esteeming citizens, and assertive scholars, and black-robed lawyers, and burly soldiers, and people of countless occupations, and people of no occupation at all, stood and crowded and surged and talked and chaffed, and bought fruit and wine and beer from the clamorous venders, had no ceiling but the sky. It had no floor but the bare ground, and no seats whatever.

The crowd in this so-called "yard" was expectant. The silk and velvet gentry sitting in the boxes, some of whom smoked pipes and ogled the few citizenesses in the better gallery, were for the most part prepared to be, or to seem, bored. The solid citizens in gallery and yard were manifestly there to get the worth of their eightpence or sixpence apiece, in solid entertainment. The apple-chewing, nut-cracking, fighting apprentices and riff-raff in the topmost gallery were turbulently ready for fun and tumult, whether in the play or of their own making. In the yard a few self-reliant women, not of the better order, and some of them smoking like men, struggled to hold their own amidst the hustling throng....