A General Sketch of the European War The First Phase 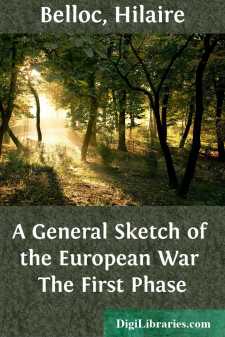 It is the object of this book, and those which will succeed it in the same series, to put before the reader the main lines of the European War as it proceeds. Each such part must necessarily be completed and issued some little time after the events to which it relates have passed into history. The present first, or introductory volume, which is a preface to the whole, covers no more than the outbreak of hostilities, and is chiefly concerned with an examination of the historical causes which produced the conflict, an estimate of the comparative strength of the various combatants, and a description of the first few days during which these combatants took up their positions and suffered the first great shocks of the campaigns in East and West.

But in order to serve as an introduction to the remainder of the series, it is necessary that the plan upon which these books are to be constructed should be clearly explained.

There is no intention of giving in detail and with numerous exact maps the progress of the campaigns. Still less does the writer propose to examine disputed points of detail, or to enumerate the units employed over that vast field. His object is to make clear, as far as he is able, those great outlines of the business which too commonly escape the general reader.

This war is the largest and the weightiest historical incident which Europe has known for many centuries. It will surely determine the future of Europe, and in particular the future of this country. Yet the comprehension of its movements is difficult to any one not acquainted with the technical language and the special study of military history; and the reading of the telegrams day by day, even though it be accompanied by the criticisms of the military experts in the newspapers, leaves the mass of men with a most confused conception of what happened and why it happened.

Now, it is possible, by greatly simplifying maps, by further simplifying these into clear diagrams, still more by emphasizing what is essential and by deliberately omitting a crowd of details—by showing first the framework, as it were, of any principal movement, and then completing that framework with the necessary furniture of analysed record—to give any one a conception both of what happened and of how it happened.

It is even possible, where the writer has seen the ground over which the battles have been fought (and much of it is familiar to the author of this), so to describe such ground to the reader that he will in some sort be able to see for himself the air and the view in which the things were done: thus more than through any other method will the things be made real to him. The aim, therefore, of these pages, and of those that will succeed them, is to give such a general idea of the campaigns as a whole as will permit whoever has grasped it a secure comprehension of the forces at work, and of the results of those forces. It is desired, for example, that the reader of these pages shall be able to say to himself: "The Germanic body expected to win—and no wonder, for it had such and such advantages in number and in equipment.......