A General History and Collection of Voyages and Travels - Volume 07 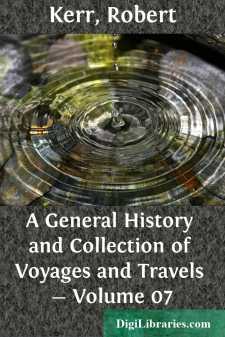 CONTINUATION OF THE PORTUGUESE TRANSACTIONS IN INDIA, AFTER THE RETURN OF DON STEPHANO DE GAMA FROM SUEZ IN 1541, TO THE REDUCTION OF PORTUGAL UNDER THE DOMINION OF SPAIN IN 1581.

Account of an Expedition of the Portuguese from India to Madagascar in 1613.

Being anxious to find out a considerable number of Portuguese who were reported to exist in the island of St. Lawrence or Madagascar, having been cast away at different times on that island, and also desirous of propagating the ever blessed gospel among its inhabitants, and to exclude the Hollanders from that island by establishing a friendly correspondence with the native princes, the viceroy Don Jerome de Azevedo sent thither, in 1613, a caravel from Goa commanded by Paul Rodrigues de Costa, accompanied by two Jesuits, some interpreters, and a competent number of soldiers. This island is about 260 leagues in length and 600 in circumference[1], its greatest extent being from N.N.E. to S.S.W. It is 80 leagues from E. to W. where widest, but considerably less towards the north, where it ends in a point named St Ignatius which is about 15 leagues from east to west[2]. It may be considered as divided into three parts. The first or northern portion is divided from the other two by an imaginary line from east to west at Cape St Andrew[3]. The other two divisions are formed by a chain of mountains running nearly south from this line to Cape St Romanus, otherwise Cape St Mary, but much nearer the east coast than the west. The island is divided into a great number of kingdoms, but so confusedly and ill-defined, that it were endless to enumerate them. It is very populous, the inhabitants having many cities and towns of different extent and grandeur[4]. The country is fertile and well watered, and everywhere diversified with mountains, vallies, rivers, bays, and ports. The natives have no general name for the island, and are entirely ignorant of those of Madagascar and St Lawrence, which are given to it by strangers. The general population of the island consists of a nation called Buques, who have no religion and consequently no priests or places of worship, yet all their youth are circumcised at six or seven years old, any one performing the operation. The natives are not all of one colour; some being quite black with crisp or curled hair like negroes; others not quite so black with lank hair; others again resembling mulatoes; while some that live in the interior are almost white, yet have hair of both kinds. They are of large stature, strong and well made, of clear judgment, and apt to learn. Every man has as many wives as he pleases or can maintain, turning them off at pleasure, when they are sure to find other husbands, all of whom buy their wives from their fathers, by way of repaying the expence of their maintenance before marriage. Their funeral obsequies consist chiefly in feasting the guests; and their mourning in laying aside all appearance of joy, and cutting off their hair or daubing their faces and bodies with clay....