A Final Reckoning A Tale of Bush Life in Australia 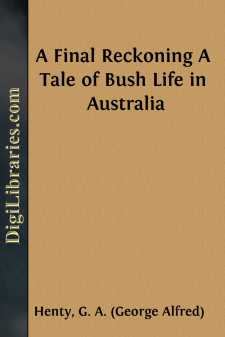 In this tale I have left the battlefields of history, and have written a story of adventure in Australia, in the early days when the bush rangers and the natives constituted a real and formidable danger to the settlers. I have done this, not with the intention of extending your knowledge, or even of pointing a moral, although the story is not without one; but simply for a change--a change both for you and myself, but frankly, more for myself than for you. You know the old story of the boy who bothered his brains with Euclid, until he came to dream regularly that he was an equilateral triangle enclosed in a circle. Well, I feel that unless I break away sometimes from history, I shall be haunted day and night by visions of men in armour, and soldiers of all ages and times.

If, when I am away on a holiday I come across the ruins of a castle, I find myself at once wondering how it could best have been attacked, and defended. If I stroll down to the Thames, I begin to plan schemes of crossing it in the face of an enemy; and if matters go on, who can say but that I may find myself, some day, arrested on the charge of surreptitiously entering the Tower of London, or effecting an escalade of the keep of Windsor Castle! To avoid such a misfortune--which would entail a total cessation of my stories, for a term of years--I have turned to a new subject, which I can only hope that you will find as interesting, if not as instructive, as the other books which I have written.

"You are the most troublesome boy in the village, Reuben Whitney, and you will come to a bad end."

The words followed a shower of cuts with the cane. The speaker was an elderly man, the master of the village school of Tipping, near Lewes, in Sussex; and the words were elicited, in no small degree, by the vexation of the speaker at his inability to wring a cry from the boy whom he was striking. He was a lad of some thirteen years of age, with a face naturally bright and intelligent; but at present quivering with anger.

"You ought to be ashamed of yourself," the master said, "instead of speaking in that way. You, who learn easier than anyone here, and could always be at the top of your class, if you chose. I had hoped better things of you, Reuben; but it's just the way, it's your bright boys as mostly gets into mischief."

At this moment the door of the school room opened, and a lady with two girls, one of about fourteen and the other eleven years of age, entered.

"What is the matter now?" the lady asked, seeing the schoolmaster, cane in hand, and the boy standing before him.

"Reuben Whitney! What, in trouble again, Reuben? I am afraid you are a very troublesome boy."

"I am not troublesome, ma'm," the boy said sturdily. "That is, I wouldn't be if they would let me alone; but everything that is done bad, they put it down to me."

"But what have you been doing now, Reuben?"

"I have done nothing at all, ma'm; but he's always down on me," and he pointed to the master, "and when they are always down on a fellow, it's no use his trying to do right."