A Fearful Responsibility and Other Stories 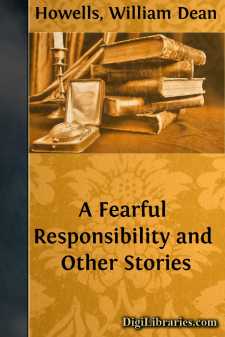 A FEARFUL RESPONSIBILITY. I.

Every loyal American who went abroad during the first years of our great war felt bound to make himself some excuse for turning his back on his country in the hour of her trouble. But when Owen Elmore sailed, no one else seemed to think that he needed excuse. All his friends said it was the best thing for him to do; that he could have leisure and quiet over there, and would be able to go on with his work.

At the risk of giving a farcical effect to my narrative, I am obliged to confess that the work of which Elmore's friends spoke was a projected history of Venice. So many literary Americans have projected such a work that it may now fairly be regarded as a national enterprise. Elmore was too obscure to have been announced in the usual way by the newspapers as having this design; but it was well known in his town that he was collecting materials when his professorship in the small inland college with which he was connected lapsed through the enlistment of nearly all the students. The president became colonel of the college regiment; and in parting with Elmore, while their boys waited on the campus without, he had said, "Now, Elmore, you must go on with your history of Venice. Go to Venice and collect your materials on the spot. We're coming through this all right. Mr. Seward puts it at sixty days, but I'll give them six months to lay down their arms, and we shall want you back at the end of the year. Don't you have any compunctions about going. I know how you feel; but it is perfectly right for you to keep out of it. Good-by." They wrung each other's hands for the last time,—the president fell at Fort Donelson; but now Elmore followed him to the door, and when he appeared there one of the boyish captains shouted, "Three cheers for Professor Elmore!" and the president called for the tiger, and led it, whirling his cap round his head.

Elmore went back to his study, sick at heart. It grieved and vexed him that even these had not thought that he should go to the war, and that his inward struggle on that point had been idle so far as others were concerned. He had been quite earnest in the matter; he had once almost volunteered as a private soldier: he had consulted his doctor, who sternly discouraged him. He would have been truly glad of any accident that forced him into the ranks; but, as he used afterward to say, it was not his idea of soldiership to enlist for the hospital. At the distance of five hundred miles from the scene of hostilities, it was absurd to enter the Home Guard; and, after all, there were, even at first, some selfish people who went into the army, and some unselfish people who kept out of it. Elmore's bronchitis was a disorder which active service would undoubtedly have aggravated; as it was, he made a last effort to be of use to our Government as a bearer of dispatches. Failing such an appointment, he submitted to expatriation as he best could; and in Italy he fought for our cause against the English, whom he found everywhere all but in arms against us.

He sailed, in fine, with a very fair conscience. "I should be perfectly at ease," he said to his wife, as the steamer dropped smoothly down to Sandy Hook, "if I were sure that I was not glad to be getting away."

"You are not glad," she answered.

"I don't know, I don't know," he said, with the weak persistence of a man willing that his wife should persuade him against his convictions; "I wish that I felt certain of it."

"You are too sick to go to the war; nobody expected you to go."

"I know that, and I can't say that I like it. As for being too sick, perhaps it's the part of a man to go if he dies on the way to the field. It would encourage the others," he added, smiling faintly.

She ignored the tint from Voltaire in replying: "Nonsense! It would do no good at all. At any rate, it's too late now."

The sea-sickness which shortly followed formed a diversion from his accusing thoughts....