A Fascinating Traitor An Anglo-Indian Story 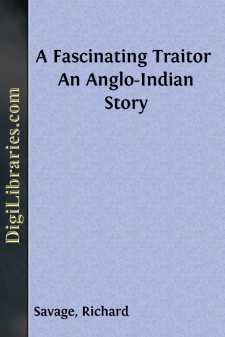 CHAPTER I. A CHANCE MEETING AT GENEVA.

"By Jove! I may as well make an end of the thing right here to-night!" was the dejected conclusion of a long council of war over which Major Alan Hawke had presided, with the one straggling comfort of being its only member.

All this long September afternoon he had dawdled away in feeding certain rapacious swans navigating gracefully around Rousseau's Island. He had consumed several Trichinopoly cigars in the interval, and had moodily gazed back upon the strange path which had led him to the placid shores of Lake Leman! The gay promenaders envied the debonnair-looking young Briton, whose outer man was essentially "good form." Children left the side of their ox-eyed bonnes to challenge the handsome young stranger with shy, friendly approaches.

Bevies of flashing-eyed American girls "took him in" with parthian glances, and even a widowed Russian princess, hobbling by, easing her gouty steps with a jeweled cane, gazed back upon the moody Adonis and sighed for the vanished days, when she possessed both the physical and mental capacity to wander from the beaten paths of the proprieties.

But—the world forgetting—the young man lingered long, gazing out upon the broad expanse of the waters, his eyes resting carelessly upon the superb panorama of the southern shore. He had wandered far away from the Grand Hotel National, in the aimlessness of sore mental unrest, and, all unheeded, the hours passed on, as he threaded the streets of the proud old Swiss burgher city. He had known its every turn in brighter days, and, though the year of ninety-one was a brilliant Alpine season, and he was in the very flower of youth and manly promise, gaunt care walked as a viewless warder at Alan Hawke's side.

He had crossed over the Pont de Montblanc to the British Consulate, only to learn that the very man whom he had come from Monaco to seek, was now already at Aix la Chapelle, on his way to America, on a long leave. He had wearily made a tour of the principal hotels and scanned the registers with no lucky find! Not a single gleam of hope shone out in all the polyglot inscriptions passing under his eye! And so he had sadly betaken himself to a safe, retired place, where he could hold the aforesaid council of war.

The practical part of the operations of this sole committee of ways and means, was an exhaustive examination of his depleted pockets. A few sovereigns and a single crisp twenty-pound Bank of England note constituted the rear guard of Alan Hawke's vanished "sinews of war." The young man briefly noted the slender store, with a sigh.

"Twenty-five pounds—and a little trumpery jewelry—I can't ever get back to India on that!" He seemed to hear again the rasping voice of the vulpine caller at Monte Carlo: "Messieurs! Faites vos jeux! Rien ne va plus! Le jeu est fait!" And, if a dismal failure in Lender had been his Leipsic, the black week at Monaco had been his long drawn-out Waterloo! "I was a rank fool to go there," he growled, "and a greater fool to come over here!...