A Family Man : in three acts 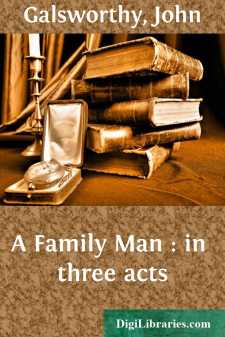 ACT I SCENE I The study of JOHN BUILDER in the provincial town of Breconridge.A panelled room wherein nothing is ever studied, except perhapsBUILDER'S face in the mirror over the fireplace. It is, however,comfortable, and has large leather chairs and a writing table in thecentre, on which is a typewriter, and many papers. At the back is alarge window with French outside shutters, overlooking the street,for the house is an old one, built in an age when the homes ofdoctors, lawyers and so forth were part of a provincial town, andnot yet suburban. There are two or three fine old prints on thewalls, Right and Left; and a fine, old fireplace, Left, with afender on which one can sit. A door, Left back, leads into thedining-room, and a door, Right forward, into the hall.JOHN BUILDER is sitting in his after-breakfast chair before the firewith The Times in his hands. He has breakfasted well, and is inthat condition of first-pipe serenity in which the affairs of thenation seem almost bearable. He is a tallish, square, personableman of forty-seven, with a well-coloured, jowly, fullish face,marked under the eyes, which have very small pupils and a good dealof light in them. His bearing has force and importance, as of a manaccustomed to rising and ownerships, sure in his opinions, and notlacking in geniality when things go his way. Essentially aMidlander. His wife, a woman of forty-one, of ivory tint, with athin, trim figure and a face so strangely composed as to be almostlike a mask (essentially from Jersey) is putting a nib into apen-holder, and filling an inkpot at the writing-table.As the curtain rises CAMILLE enters with a rather broken-downcardboard box containing flowers. She is a young woman with a goodfigure, a pale face, the warm brown eyes and complete poise of aFrenchwoman. She takes the box to MRS BUILDER. MRS BUILDER. The blue vase, please, Camille.CAMILLE fetches a vase. MRS BUILDER puts the flowers into the vase.CAMILLE gathers up the debris; and with a glance at BUILDER goesout.

BUILDER. Glorious October! I ought to have a damned good day's shooting with Chantrey tomorrow.

MRS BUILDER. [Arranging the flowers] Aren't you going to the office this morning?

BUILDER. Well, no, I was going to take a couple of days off. If you feel at the top of your form, take a rest—then you go on feeling at the top. [He looks at her, as if calculating] What do you say to looking up Athene?

MRS BUILDER. [Palpably astonished] Athene? But you said you'd done with her?

BUILDER. [Smiling] Six weeks ago; but, dash it, one can't have done with one's own daughter. That's the weakness of an Englishman; he can't keep up his resentments. In a town like this it doesn't do to have her living by herself. One of these days it'll get out we've had a row. That wouldn't do me any good.

BUILDER. Besides, I miss her. Maud's so self-absorbed. It makes a big hole in the family, Julia. You've got her address, haven't you?