A Drama on the Seashore 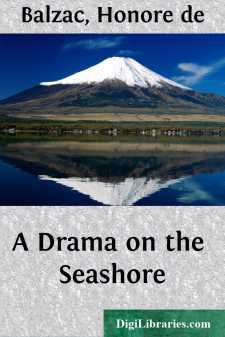 A DRAMA ON THE SEASHORE

Nearly all young men have a compass with which they delight in measuring the future. When their will is equal to the breadth of the angle at which they open it the world is theirs. But this phenomenon of the inner life takes place only at a certain age. That age, which for all men lies between twenty-two and twenty-eight, is the period of great thoughts, of fresh conceptions, because it is the age of immense desires. After that age, short as the seed-time, comes that of execution. There are, as it were, two youths,—the youth of belief, the youth of action; these are often commingled in men whom Nature has favored and who, like Caesar, like Newton, like Bonaparte, are the greatest among great men.

I was measuring how long a time it might take a thought to develop. Compass in hand, standing on a rock some hundred fathoms above the ocean, the waves of which were breaking on the reef below, I surveyed my future, filling it with books as an engineer or builder traces on vacant ground a palace or a fort.

The sea was beautiful; I had just dressed after bathing; and I awaited Pauline, who was also bathing, in a granite cove floored with fine sand, the most coquettish bath-room that Nature ever devised for her water-fairies. The spot was at the farther end of Croisic, a dainty little peninsula in Brittany; it was far from the port, and so inaccessible that the coast-guard seldom thought it necessary to pass that way. To float in ether after floating on the wave!—ah! who would not have floated on the future as I did! Why was I thinking? Whence comes evil?—who knows! Ideas drop into our hearts or into our heads without consulting us. No courtesan was ever more capricious nor more imperious than conception is to artists; we must grasp it, like fortune, by the hair when it comes.

Astride upon my thought, like Astolphe on his hippogriff, I was galloping through worlds, suiting them to my fancy. Presently, as I looked about me to find some omen for the bold productions my wild imagination was urging me to undertake, a pretty cry, the cry of a woman issuing refreshed and joyous from a bath, rose above the murmur of the rippling fringes as their flux and reflux marked a white line along the shore. Hearing that note as it gushed from a soul, I fancied I saw among the rocks the foot of an angel, who with outspread wings cried out to me, "Thou shalt succeed!" I came down radiant, light-hearted; I bounded like a pebble rolling down a rapid slope. When she saw me, she said,—

I did not answer; my eyes were moist. The night before, Pauline had understood my sorrows, as she now understood my joy, with the magical sensitiveness of a harp that obeys the variations of the atmosphere. Human life has glorious moments. Together we walked in silence along the beach. The sky was cloudless, the sea without a ripple; others might have thought them merely two blue surfaces, the one above the other, but we—we who heard without the need of words, we who could evoke between these two infinitudes the illusions that nourish youth,—we pressed each other's hands at every change in the sheet of water or the sheets of air, for we took those slight phenomena as the visible translation of our double thought....