A Diversity of Creatures 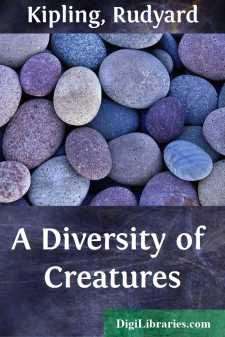 As Easy as A.B.C. (1912) The A.B.C., that semi-elected, semi-nominated body of a few score persons, controls the Planet. Transportation is Civilisation, our motto runs. Theoretically we do what we please, so long as we do not interfere with the traffic and all it implies. Practically, the A.B.C. confirms or annuls all international arrangements, and, to judge from its last report, finds our tolerant, humorous, lazy little Planet only too ready to shift the whole burden of public administration on its shoulders.

'With the Night Mail.'

Isn't it almost time that our Planet took some interest in the proceedings of the Aërial Board of Control? One knows that easy communications nowadays, and lack of privacy in the past, have killed all curiosity among mankind, but as the Board's Official Reporter I am bound to tell my tale.

At 9.30 A.M., August 26, A.D. 2065, the Board, sitting in London, was informed by De Forest that the District of Northern Illinois had riotously cut itself out of all systems and would remain disconnected till the Board should take over and administer it direct.

Every Northern Illinois freight and passenger tower was, he reported, out of action; all District main, local, and guiding lights had been extinguished; all General Communications were dumb, and through traffic had been diverted. No reason had been given, but he gathered unofficially from the Mayor of Chicago that the District complained of 'crowd-making and invasion of privacy.'

As a matter of fact, it is of no importance whether Northern Illinois stay in or out of planetary circuit; as a matter of policy, any complaint of invasion of privacy needs immediate investigation, lest worse follow.

By 9-45 A.M. De Forest, Dragomiroff (Russia), Takahira (Japan), and Pirolo (Italy) were empowered to visit Illinois and 'to take such steps as might be necessary for the resumption of traffic and all that that implies.' By 10 A.M. the Hall was empty, and the four Members and I were aboard what Pirolo insisted on calling 'my leetle godchild'--that is to say, the new Victor Pirolo. Our Planet prefers to know Victor Pirolo as a gentle, grey-haired enthusiast who spends his time near Foggia, inventing or creating new breeds of Spanish-Italian olive-trees; but there is another side to his nature--the manufacture of quaint inventions, of which the Victor Pirolo is, perhaps, not the least surprising. She and a few score sister-craft of the same type embody his latest ideas. But she is not comfortable. An A.B.C. boat does not take the air with the level-keeled lift of a liner, but shoots up rocket-fashion like the 'aeroplane' of our ancestors, and makes her height at top-speed from the first. That is why I found myself sitting suddenly on the large lap of Eustace Arnott, who commands the A.B.C. Fleet. One knows vaguely that there is such a thing as a Fleet somewhere on the Planet, and that, theoretically, it exists for the purposes of what used to be known as 'war.' Only a week before, while visiting a glacier sanatorium behind Gothaven, I had seen some squadrons making false auroras far to the north while they manoeuvred round the Pole; but, naturally, it had never occurred to me that the things could be used in earnest....