A Distinguished Provincial at Paris 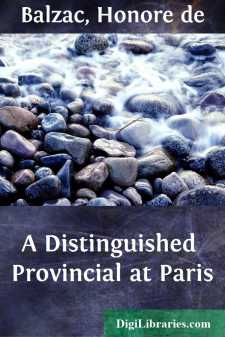 Mme. de Bargeton and Lucien de Rubempre had left Angouleme behind, and were traveling together upon the road to Paris. Not one of the party who made that journey alluded to it afterwards; but it may be believed that an infatuated youth who had looked forward to the delights of an elopement, must have found the continual presence of Gentil, the man-servant, and Albertine, the maid, not a little irksome on the way. Lucien, traveling post for the first time in his life, was horrified to see pretty nearly the whole sum on which he meant to live in Paris for a twelvemonth dropped along the road. Like other men who combine great intellectual powers with the charming simplicity of childhood, he openly expressed his surprise at the new and wonderful things which he saw, and thereby made a mistake. A man should study a woman very carefully before he allows her to see his thoughts and emotions as they arise in him. A woman, whose nature is large as her heart is tender, can smile upon childishness, and make allowances; but let her have ever so small a spice of vanity herself, and she cannot forgive childishness, or littleness, or vanity in her lover. Many a woman is so extravagant a worshiper that she must always see the god in her idol; but there are yet others who love a man for his sake and not for their own, and adore his failings with his greater qualities.

Lucien had not guessed as yet that Mme. de Bargeton's love was grafted on pride. He made another mistake when he failed to discern the meaning of certain smiles which flitted over Louise's lips from time to time; and instead of keeping himself to himself, he indulged in the playfulness of the young rat emerging from his hole for the first time.

The travelers were set down before daybreak at the sign of the Gaillard-Bois in the Rue de l'Echelle, both so tired out with the journey that Louise went straight to bed and slept, first bidding Lucien to engage the room immediately overhead. Lucien slept on till four o'clock in the afternoon, when he was awakened by Mme. de Bargeton's servant, and learning the hour, made a hasty toilet and hurried downstairs.

Louise was sitting in the shabby inn sitting-room. Hotel accommodation is a blot on the civilization of Paris; for with all its pretensions to elegance, the city as yet does not boast a single inn where a well-to-do traveler can find the surroundings to which he is accustomed at home. To Lucien's just-awakened, sleep-dimmed eyes, Louise was hardly recognizable in this cheerless, sunless room, with the shabby window-curtains, the comfortless polished floor, the hideous furniture bought second-hand, or much the worse for wear.

Some people no longer look the same when detached from the background of faces, objects, and surroundings which serve as a setting, without which, indeed, they seem to lose something of their intrinsic worth. Personality demands its appropriate atmosphere to bring out its values, just as the figures in Flemish interiors need the arrangement of light and shade in which they are placed by the painter's genius if they are to live for us....