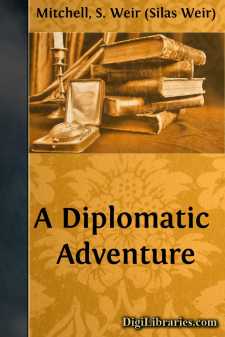 No man has ever been able to write the history of the greater years of a nation so as to include the minor incidents of interest. They pass unnoted, although in some cases they may have had values influential in determining the course of events. It chanced that I myself was an actor in one of these lesser incidents, when second secretary to our legation in France, during the summer of 1862. I may possibly overestimate the ultimate importance of my adventure, for Mr. Adams, our minister of the court of St. James, seems to have failed to record it, or, at least, there is no allusion to it in his biography. In the perplexing tangle of the diplomacy of the darker days of our civil war, many strange stories must have passed unrecorded, but surely none of those remembered and written were more singular than the occurrences which disturbed the quiet of my uneventful official life in the autumn of 1862.

At this time I had been in the legation two years, and was comfortably lodged in pleasant apartments in the Rue Rivoli.

Somewhere about the beginning of July I had occasion to engage a new servant, and of this it becomes needful to speak because the man I took chanced to play a part in the little drama which at last involved many more important people.

I had dismissed a stout Alsatian because of my certainty that, like his predecessor, he was a spy in the employ of the imperial police. There was little for him to learn; but to feel that I was watched, and, once, that my desk had been searched, was disagreeable. This time I meant to be on safer ground, and was inquiring for a suitable servant when a lean, alert little man presented himself with a good record as a valet in England and France. He was very neat and had a humorous look which caught my fancy. His name was Alphonse Duret. We agreed easily as to wages and that he was to act as valet, take care of my salon, and serve as footman at need. Yes, he could come at once. Upon this I said:

“A word more and I engage you.” And then, sure that his reply would be a confident negative, “Are you not a spy in the service of the police?” To my amused surprise he said:

“Yes, but will monsieur permit me to explain?”

“I was intended by my family to be a priest, but circumstances caused me to make a change. It was not gay.”

“I was for a time a valet, but circumstances occurred—monsieur may observe that I am frank. Later I was on the police force, but after two years I fell ill and lost my place. When I was well again, I was taken on as an observer. Monsieur permits me to describe it as an observer?”

“I cannot contradict monsieur. I speak English—I learned it when I was valet for Mr. Parker in London. That is why I am sent here. The pay is of a minuteness. Circumstances make some addition desirable.”

I perceived that circumstances appeared to play a large part in this queer autobiography, and saved the necessity of undesirable fullness of statement.

I said: “You appear to be frank, but are you to belong to me or to the police? In your studies for the priesthood you may have heard that a man cannot serve two masters.”

His face became of a sudden what I venture to call luminous with the pleasure an intelligent man has in finding an answer to a difficult question.

He replied modestly: “A man has many masters. One of mine has used me badly. I became ill from exposure in the service, but they refused to take me back. If monsieur will trust me, there shall be but one real master.”

The man interested me. I said: “If I engage you, you will, I suppose, desire to remain what you call an observer.”

“Yes. Monsieur may be sure that either I or another will observe. Since the unfortunate war in America, monsieur and all others of his legation are watched.”

“And generally every one else,” I said. “Perhaps you, too, are observed.”