A Desperate Character and Other Stories 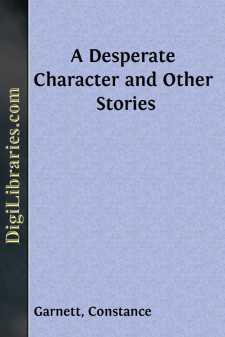 The six tales now translated for the English reader were written by Turgenev at various dates between 1847 and 1881. Their chronological order is:—

Pyetushkov is the work of a young man of twenty-nine, and its lively, unstrained realism is so bold, intimate, and delicate as to contradict the flattering compliment that the French have paid to one another—that Turgenev had need to dress his art by the aid of French mirrors.

Although Pyetushkov shows us, by a certain open naïveté of style, that a youthful hand is at work, it is the hand of a young master, carrying out the realism of the 'forties'—that of Gogol, Balzac, and Dickens—straightway, with finer point, to find a perfect equilibrium free from any bias or caricature. The whole strength and essence of the realistic method has been developed in Pyetushkov to its just limits. The Russians are instinctive realists, and carry the warmth of life into their pages, which warmth the French seem to lose in clarifying their impressions and crystallising them in art. Pyetushkov is not exquisite: it is irresistible. Note how the reader is transported bodily into Pyetushkov's stuffy room, and how the major fairly boils out of the two pages he lives in! (pp. 301, 302). That is realism if you like. A woman will see the point of Pyetushkov very quickly. Onisim and Vassilissa and the aunt walk and chatter around the stupid Pyetushkov, and glance at him significantly in a manner that reveals everything about these people's world. All the servants who appear in the tales in this volume are hit off so marvellously that one sees the lower-class world, which is such a mystery to certain refined minds, has no secrets for Turgenev.

Of a different, and to our taste more fascinating, genre is The Brigadier. It is greater art because life's prosaic growth is revealed not merely realistically, but also poetically, life as a tiny part of the great universe around it. The tale is a microcosm of Turgenev's own nature; his love of Nature, his tender sympathy for all humble, ragged, eccentric, despised human creatures; his unfaltering keenness of gaze into character, his fine sense of proportion, mingle in. The Brigadier, to create for us a sense of the pitiableness of man's tiny life, of the mere human seed which springs and spreads a while on earth, and dies under the menacing gaze of the advancing years. 'Out of the sweetness came forth strength' is perhaps the best saying by which one can define Turgenev's peculiar merits in The Brigadier.

Punin and Baburin presents to us again one of those ragged ones, one of 'the poor in spirit,' the idealist Punin, a character whose portrait challenges Dostoievsky's skill on the latter's own ground. That delicious Punin! and that terrible grandmother's scene with Baburin! How absolutely Slav is the blending of irony and kindness in the treatment of Punin, Cucumber, and Pyetushkov, few English readers will understand. All the characters in Punin and Baburin are so strongly drawn, so intensely alive, that, like Rembrandt's portraits, they make the living people, who stand looking at them, absurdly grey and lifeless by comparison!...