A Daughter of the Middle Border 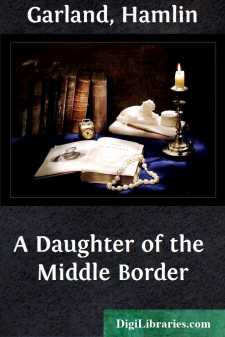 In the summer of 1893, after nine years of hard but happy literary life in Boston and New York, I decided to surrender my residence in the East and reëstablish my home in the West, a decision which seemed to be—as it was—a most important event in my career.

This change of headquarters was due not to a diminishing love for New England, but to a deepening desire to be near my aging parents, whom I had persuaded, after much argument, to join in the purchase of a family homestead, in West Salem, Wisconsin, the little village from which we had all adventured some thirty years before.

My father, a typical pioneer, who had grown gray in opening new farms, one after another on the wind-swept prairies of Iowa and Dakota, was not entirely content with my plan but my mother, enfeebled by the hardships of a farmer's life, and grateful for my care, was glad of the arrangement I had brought about. In truth, she realized that her days of pioneering were over and the thought of ending her days among her friends and relatives was a comfort to her. That I had rescued her from a premature grave on the barren Dakota plain was certain, and the hope of being able to provide for her comfort was the strongest element in my plan.

After ten years of separation we were agreed upon a project which would enable us as a family to spend our summers together; for my brother, Franklin, an actor in New York City, had promised to take his vacation in the home which we had purchased.

As this homestead (which was only eight hours by rail from Chicago) is to be one of the chief characters in this story, I shall begin by describing it minutely. It was not the building in which my life began—I should like to say it was, but it was not. My birthplace was a cabin—part logs and part lumber—on the opposite side of the town. Originally a squatter's cabin, it was now empty and forlorn, a dreary monument of the pioneer days, which I did not take the trouble to enter. The house which I had selected for the final Garland homestead, was entirely without any direct associations with my family. It was only an old frame cottage, such as a rural carpenter might build when left to his own devices, rude, angular, ugly of line and drab in coloring, but it stood in the midst of a four-acre field, just on the edge of the farmland. Sheltered by noble elms and stately maples, its windows fronted on a low range of wooded hills, whose skyline (deeply woven into my childish memories) had for me the charm of things remembered, and for my mother a placid beauty which (after her long stay on the treeless levels of Dakota) was almost miraculous in effect. Entirely without architectural dignity, our new home was spacious and suggested the comfort of the region round about.

My father, a man of sixty-five, though still actively concerned with a wide wheat farm in South Dakota, had agreed to aid me in maintaining this common dwelling place in Wisconsin provided he could return to Dakota during seeding and again at harvest....