A Daughter of Eve 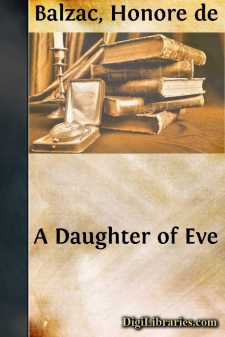 CHAPTER I. THE TWO MARIES

In one of the finest houses of the rue Neuve-des-Mathurins, at half-past eleven at night, two young women were sitting before the fireplace of a boudoir hung with blue velvet of that tender shade, with shimmering reflections, which French industry has lately learned to fabricate. Over the doors and windows were draped soft folds of blue cashmere, the tint of the hangings, the work of one of those upholsterers who have just missed being artists. A silver lamp studded with turquoise, and suspended by chains of beautiful workmanship, hung from the centre of the ceiling. The same system of decoration was followed in the smallest details, and even to the ceiling of fluted blue silk, with long bands of white cashmere falling at equal distances on the hangings, where they were caught back by ropes of pearl. A warm Belgian carpet, thick as turf, of a gray ground with blue posies, covered the floor. The furniture, of carved ebony, after a fine model of the old school, gave substance and richness to the rather too decorative quality, as a painter might call it, of the rest of the room. On either side of a large window, two etageres displayed a hundred precious trifles, flowers of mechanical art brought into bloom by the fire of thought. On a chimney-piece of slate-blue marble were figures in old Dresden, shepherds in bridal garb, with delicate bouquets in their hands, German fantasticalities surrounding a platinum clock, inlaid with arabesques. Above it sparkled the brilliant facets of a Venice mirror framed in ebony, with figures carved in relief, evidently obtained from some former royal residence. Two jardinieres were filled with the exotic product of a hot-house, pale, but divine flowers, the treasures of botany.

In this cold, orderly boudoir, where all things were in place as if for sale, no sign existed of the gay and capricious disorder of a happy home. At the present moment, the two young women were weeping. Pain seemed to predominate. The name of the owner, Ferdinand du Tillet, one of the richest bankers in Paris, is enough to explain the luxury of the whole house, of which this boudoir is but a sample.

Though without either rank or station, having pushed himself forward, heaven knows how, du Tillet had married, in 1831, the daughter of the Comte de Granville, one of the greatest names in the French magistracy,—a man who became peer of France after the revolution of July. This marriage of ambition on du Tillet's part was brought about by his agreeing to sign an acknowledgment in the marriage contract of a dowry not received, equal to that of her elder sister, who was married to Comte Felix de Vandenesse. On the other hand, the Granvilles obtained the alliance with de Vandenesse by the largeness of the "dot." Thus the bank repaired the breach made in the pocket of the magistracy by rank. Could the Comte de Vandenesse have seen himself, three years later, the brother-in-law of a Sieur Ferdinand DU Tillet, so-called, he might not have married his wife; but what man of rank in 1828 foresaw the strange upheavals which the year 1830 was destined to produce in the political condition, the fortunes, and the customs of France?...