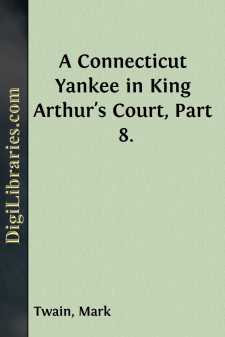 AN ENCOUNTER IN THE DARK

London—to a slave—was a sufficiently interesting place.  It was merely a great big village; and mainly mud and thatch.  The streets were muddy, crooked, unpaved.  The populace was an ever flocking and drifting swarm of rags, and splendors, of nodding plumes and shining armor.  The king had a palace there; he saw the outside of it.  It made him sigh; yes, and swear a little, in a poor juvenile sixth century way.  We saw knights and grandees whom we knew, but they didn't know us in our rags and dirt and raw welts and bruises, and wouldn't have recognized us if we had hailed them, nor stopped to answer, either, it being unlawful to speak with slaves on a chain.  Sandy passed within ten yards of me on a mule—hunting for me, I imagined.  But the thing which clean broke my heart was something which happened in front of our old barrack in a square, while we were enduring the spectacle of a man being boiled to death in oil for counterfeiting pennies.  It was the sight of a newsboy—and I couldn't get at him!  Still, I had one comfort—here was proof that Clarence was still alive and banging away.  I meant to be with him before long; the thought was full of cheer.

I had one little glimpse of another thing, one day, which gave me a great uplift.  It was a wire stretching from housetop to housetop. Telegraph or telephone, sure.  I did very much wish I had a little piece of it.  It was just what I needed, in order to carry out my project of escape.  My idea was to get loose some night, along with the king, then gag and bind our master, change clothes with him, batter him into the aspect of a stranger, hitch him to the slave-chain, assume possession of the property, march to Camelot, and—

But you get my idea; you see what a stunning dramatic surprise I would wind up with at the palace.  It was all feasible, if I could only get hold of a slender piece of iron which I could shape into a lock-pick.  I could then undo the lumbering padlocks with which our chains were fastened, whenever I might choose. But I never had any luck; no such thing ever happened to fall in my way.  However, my chance came at last.  A gentleman who had come twice before to dicker for me, without result, or indeed any approach to a result, came again.  I was far from expecting ever to belong to him, for the price asked for me from the time I was first enslaved was exorbitant, and always provoked either anger or derision, yet my master stuck stubbornly to it—twenty-two dollars.  He wouldn't bate a cent.  The king was greatly admired, because of his grand physique, but his kingly style was against him, and he wasn't salable; nobody wanted that kind of a slave. I considered myself safe from parting from him because of my extravagant price.  No, I was not expecting to ever belong to this gentleman whom I have spoken of, but he had something which I expected would belong to me eventually, if he would but visit us often enough.  It was a steel thing with a long pin to it, with which his long cloth outside garment was fastened together in front....