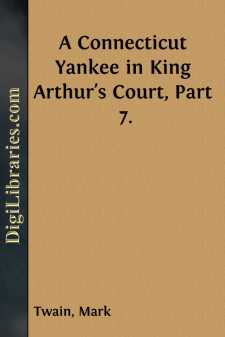 Well, when that cargo arrived toward sunset, Saturday afternoon, I had my hands full to keep the Marcos from fainting.  They were sure Jones and I were ruined past help, and they blamed themselves as accessories to this bankruptcy.  You see, in addition to the dinner-materials, which called for a sufficiently round sum, I had bought a lot of extras for the future comfort of the family: for instance, a big lot of wheat, a delicacy as rare to the tables of their class as was ice-cream to a hermit's; also a sizeable deal dinner-table; also two entire pounds of salt, which was another piece of extravagance in those people's eyes; also crockery, stools, the clothes, a small cask of beer, and so on.  I instructed the Marcos to keep quiet about this sumptuousness, so as to give me a chance to surprise the guests and show off a little.  Concerning the new clothes, the simple couple were like children; they were up and down, all night, to see if it wasn't nearly daylight, so that they could put them on, and they were into them at last as much as an hour before dawn was due.  Then their pleasure—not to say delirium—was so fresh and novel and inspiring that the sight of it paid me well for the interruptions which my sleep had suffered. The king had slept just as usual—like the dead.  The Marcos could not thank him for their clothes, that being forbidden; but they tried every way they could think of to make him see how grateful they were.  Which all went for nothing:  he didn't notice any change.

It turned out to be one of those rich and rare fall days which is just a June day toned down to a degree where it is heaven to be out of doors.  Toward noon the guests arrived, and we assembled under a great tree and were soon as sociable as old acquaintances. Even the king's reserve melted a little, though it was some little trouble to him to adjust himself to the name of Jones along at first.  I had asked him to try to not forget that he was a farmer; but I had also considered it prudent to ask him to let the thing stand at that, and not elaborate it any.  Because he was just the kind of person you could depend on to spoil a little thing like that if you didn't warn him, his tongue was so handy, and his spirit so willing, and his information so uncertain.

Dowley was in fine feather, and I early got him started, and then adroitly worked him around onto his own history for a text and himself for a hero, and then it was good to sit there and hear him hum.  Self-made man, you know.  They know how to talk.  They do deserve more credit than any other breed of men, yes, that is true; and they are among the very first to find it out, too.  He told how he had begun life an orphan lad without money and without friends able to help him; how he had lived as the slaves of the meanest master lived; how his day's work was from sixteen to eighteen hours long, and yielded him only enough black bread to keep him in a half-fed condition; how his faithful endeavors finally attracted the attention of a good blacksmith, who came near knocking him dead with kindness by suddenly offering, when he was totally unprepared, to take him as his bound apprentice for nine years and give him board and clothes and teach him the trade—or "mystery" as Dowley called it....