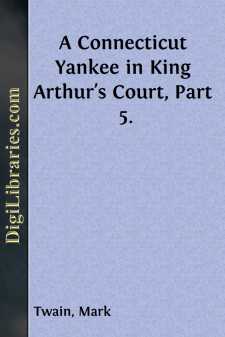 RESTORATION OF THE FOUNTAIN

Saturday noon I went to the well and looked on a while.  Merlin was still burning smoke-powders, and pawing the air, and muttering gibberish as hard as ever, but looking pretty down-hearted, for of course he had not started even a perspiration in that well yet. Finally I said:

"How does the thing promise by this time, partner?"

"Behold, I am even now busied with trial of the powerfulest enchantment known to the princes of the occult arts in the lands of the East; an it fail me, naught can avail.  Peace, until I finish."

He raised a smoke this time that darkened all the region, and must have made matters uncomfortable for the hermits, for the wind was their way, and it rolled down over their dens in a dense and billowy fog.  He poured out volumes of speech to match, and contorted his body and sawed the air with his hands in a most extraordinary way.  At the end of twenty minutes he dropped down panting, and about exhausted.  Now arrived the abbot and several hundred monks and nuns, and behind them a multitude of pilgrims and a couple of acres of foundlings, all drawn by the prodigious smoke, and all in a grand state of excitement.  The abbot inquired anxiously for results.  Merlin said:

"If any labor of mortal might break the spell that binds these waters, this which I have but just essayed had done it.  It has failed; whereby I do now know that that which I had feared is a truth established; the sign of this failure is, that the most potent spirit known to the magicians of the East, and whose name none may utter and live, has laid his spell upon this well.  The mortal does not breathe, nor ever will, who can penetrate the secret of that spell, and without that secret none can break it.  The water will flow no more forever, good Father.  I have done what man could.  Suffer me to go."

Of course this threw the abbot into a good deal of a consternation. He turned to me with the signs of it in his face, and said:

"That that spirit with the Russian name has put his spell upon the well."

"God's wounds, then are we ruined!"

"Wherefore, ye also mean that when he saith none can break the spell—"

"Yes, when he says that, he says what isn't necessarily true. There are conditions under which an effort to break it may have some chance—that is, some small, some trifling chance—of success."

"Oh, they are nothing difficult.  Only these:  I want the well and the surroundings for the space of half a mile, entirely to myself from sunset to-day until I remove the ban—and nobody allowed to cross the ground but by my authority."

"And you have no fear to try?"

"Oh, none.  One may fail, of course; and one may also succeed. One can try, and I am ready to chance it.  I have my conditions?"

"These and all others ye may name....