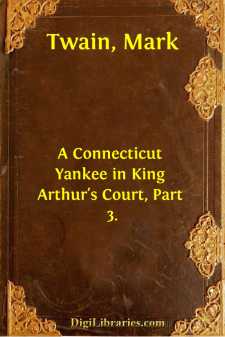 Straight off, we were in the country.  It was most lovely and pleasant in those sylvan solitudes in the early cool morning in the first freshness of autumn.  From hilltops we saw fair green valleys lying spread out below, with streams winding through them, and island groves of trees here and there, and huge lonely oaks scattered about and casting black blots of shade; and beyond the valleys we saw the ranges of hills, blue with haze, stretching away in billowy perspective to the horizon, with at wide intervals a dim fleck of white or gray on a wave-summit, which we knew was a castle.  We crossed broad natural lawns sparkling with dew, and we moved like spirits, the cushioned turf giving out no sound of footfall; we dreamed along through glades in a mist of green light that got its tint from the sun-drenched roof of leaves overhead, and by our feet the clearest and coldest of runlets went frisking and gossiping over its reefs and making a sort of whispering music, comfortable to hear; and at times we left the world behind and entered into the solemn great deeps and rich gloom of the forest, where furtive wild things whisked and scurried by and were gone before you could even get your eye on the place where the noise was; and where only the earliest birds were turning out and getting to business with a song here and a quarrel yonder and a mysterious far-off hammering and drumming for worms on a tree trunk away somewhere in the impenetrable remotenesses of the woods.  And by and by out we would swing again into the glare.

About the third or fourth or fifth time that we swung out into the glare—it was along there somewhere, a couple of hours or so after sun-up—it wasn't as pleasant as it had been.  It was beginning to get hot.  This was quite noticeable.  We had a very long pull, after that, without any shade.  Now it is curious how progressively little frets grow and multiply after they once get a start.  Things which I didn't mind at all, at first, I began to mind now—and more and more, too, all the time.  The first ten or fifteen times I wanted my handkerchief I didn't seem to care; I got along, and said never mind, it isn't any matter, and dropped it out of my mind.  But now it was different; I wanted it all the time; it was nag, nag, nag, right along, and no rest; I couldn't get it out of my mind; and so at last I lost my temper and said hang a man that would make a suit of armor without any pockets in it.  You see I had my handkerchief in my helmet; and some other things; but it was that kind of a helmet that you can't take off by yourself.  That hadn't occurred to me when I put it there; and in fact I didn't know it.  I supposed it would be particularly convenient there.  And so now, the thought of its being there, so handy and close by, and yet not get-at-able, made it all the worse and the harder to bear.  Yes, the thing that you can't get is the thing that you want, mainly; every one has noticed that. Well, it took my mind off from everything else; took it clear off, and centered it in my helmet; and mile after mile, there it stayed, imagining the handkerchief, picturing the handkerchief; and it was bitter and aggravating to have the salt sweat keep trickling down into my eyes, and I couldn't get at it....