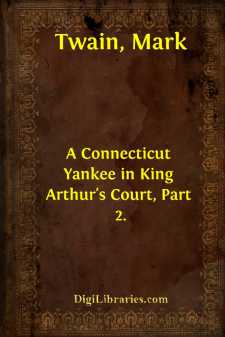 Inasmuch as I was now the second personage in the Kingdom, as far as political power and authority were concerned, much was made of me.  My raiment was of silks and velvets and cloth of gold, and by consequence was very showy, also uncomfortable.  But habit would soon reconcile me to my clothes; I was aware of that.  I was given the choicest suite of apartments in the castle, after the king's.  They were aglow with loud-colored silken hangings, but the stone floors had nothing but rushes on them for a carpet, and they were misfit rushes at that, being not all of one breed. As for conveniences, properly speaking, there weren't any.  I mean little conveniences; it is the little conveniences that make the real comfort of life.  The big oaken chairs, graced with rude carvings, were well enough, but that was the stopping place. There was no soap, no matches, no looking-glass—except a metal one, about as powerful as a pail of water.  And not a chromo. I had been used to chromos for years, and I saw now that without my suspecting it a passion for art had got worked into the fabric of my being, and was become a part of me.

It made me homesick to look around over this proud and gaudy but heartless barrenness and remember that in our house in East Hartford, all unpretending as it was, you couldn't go into a room but you would find an insurance-chromo, or at least a three-color God-Bless-Our-Home over the door; and in the parlor we had nine.  But here, even in my grand room of state, there wasn't anything in the nature of a picture except a thing the size of a bedquilt, which was either woven or knitted (it had darned places in it), and nothing in it was the right color or the right shape; and as for proportions, even Raphael himself couldn't have botched them more formidably, after all his practice on those nightmares they call his "celebrated Hampton Court cartoons."  Raphael was a bird.  We had several of his chromos; one was his "Miraculous Draught of Fishes," where he puts in a miracle of his own—puts three men into a canoe which wouldn't have held a dog without upsetting.  I always admired to study R.'s art, it was so fresh and unconventional.

There wasn't even a bell or a speaking-tube in the castle.  I had a great many servants, and those that were on duty lolled in the anteroom; and when I wanted one of them I had to go and call for him. There was no gas, there were no candles; a bronze dish half full of boarding-house butter with a blazing rag floating in it was the thing that produced what was regarded as light.  A lot of these hung along the walls and modified the dark, just toned it down enough to make it dismal.  If you went out at night, your servants carried torches.  There were no books, pens, paper or ink, and no glass in the openings they believed to be windows. It is a little thing—glass is—until it is absent, then it becomes a big thing.  But perhaps the worst of all was, that there wasn't any sugar, coffee, tea, or tobacco....