A Century of Negro Migration 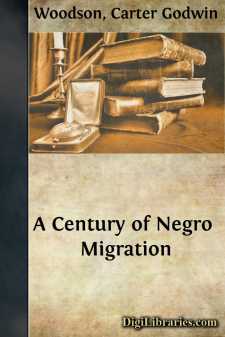 CHAPTER I FINDING A PLACE OF REFUGE

The migration of the blacks from the Southern States to those offering them better opportunities is nothing new. The objective here, therefore, will be not merely to present the causes and results of the recent movement of the Negroes to the North but to connect this event with the periodical movements of the blacks to that section, from about the year 1815 to the present day. That this movement should date from that period indicates that the policy of the commonwealths towards the Negro must have then begun decidedly to differ so as to make one section of the country more congenial to the despised blacks than the other. As a matter of fact, to justify this conclusion, we need but give passing mention here to developments too well known to be discussed in detail. Slavery in the original thirteen States was the normal condition of the Negroes. When, however, James Otis, Patrick Henry and Thomas Jefferson began to discuss the natural rights of the colonists, then said to be oppressed by Great Britain, some of the patriots of the Revolution carried their reasoning to its logical conclusion, contending that the Negro slaves should be freed on the same grounds, as their rights were also founded in the laws of nature.[1] And so it was soon done in most Northern commonwealths.

Vermont, New Hampshire, and Massachusetts exterminated the institution by constitutional provision and Rhode Island, Connecticut, New Jersey, New York and Pennsylvania by gradual emancipation acts.[2] And it was thought that the institution would soon thereafter pass away even in all southern commonwealths except South Carolina and Georgia, where it had seemingly become profitable. There came later the industrial revolution following the invention of Watt's steam engine and mechanical appliances like Whitney's cotton gin, all which changed the economic aspect of the modern world, making slavery an institution offering means of exploitation to those engaged in the production of cotton. This revolution rendered necessary a large supply of cheap labor for cotton culture, out of which the plantation system grew. The Negro slaves, therefore, lost all hope of ever winning their freedom in South Carolina and Georgia; and in Maryland, Virginia, and North Carolina, where the sentiment in favor of abolition had been favorable, there was a decided reaction which soon blighted their hopes.[3] In the Northern commonwealths, however, the sentiment in behalf of universal freedom, though at times dormant, was ever apparent despite the attachment to the South of the trading classes of northern cities, which profited by the slave trade and their commerce with the slaveholding States. The Northern States maintaining this liberal attitude developed, therefore, into an asylum for the Negroes who were oppressed in the South.

The Negroes, however, were not generally welcomed in the North. Many of the northerners who sympathized with the oppressed blacks in the South never dreamt of having them as their neighbors....