A Book of Autographs 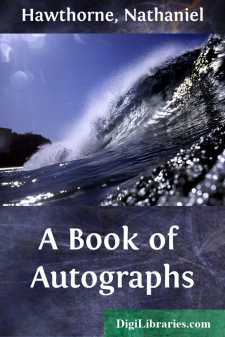 We have before us a volume of autograph letters, chiefly of soldiers and statesmen of the Revolution, and addressed to a good and brave man, General Palmer, who himself drew his sword in the cause. They are profitable reading in a quiet afternoon, and in a mood withdrawn from too intimate relation with the present time; so that we can glide backward some three quarters of a century, and surround ourselves with the ominous sublimity of circumstances that then frowned upon the writers. To give them their full effect, we should imagine that these letters have this moment been brought to town by the splashed and way-worn postrider, or perhaps by an orderly dragoon, who has ridden in a perilous hurry to deliver his despatches. They are magic scrolls, if read in the right spirit. The roll of the drum and the fanfare of the trumpet is latent in some of them; and in others, an echo of the oratory that resounded in the old halls of the Continental Congress, at Philadelphia; or the words may come to us as with the living utterance of one of those illustrious men, speaking face to face, in friendly communion. Strange, that the mere identity of paper and ink should be so powerful. The same thoughts might look cold and ineffectual, in a printed book. Human nature craves a certain materialism and clings pertinaciously to what is tangible, as if that were of more importance than the spirit accidentally involved in it. And, in truth, the original manuscript has always something which print itself must inevitably lose. An erasure, even a blot, a casual irregularity of hand, and all such little imperfections of mechanical execution, bring us close to the writer, and perhaps convey some of those subtle intimations for which language has no shape.

There are several letters from John Adams, written in a small, hasty, ungraceful hand, but earnest, and with no unnecessary flourish. The earliest is dated at Philadelphia, September 26, 1774, about twenty days after the first opening of the Continental Congress. We look at this old yellow document, scribbled on half a sheet of foolscap, and ask of it many questions for which words have no response. We would fain know what were their mutual impressions, when all those venerable faces, that have since been traced on steel, or chiselled out, of marble, and thus made familiar to posterity, first met one another's gaze! Did one spirit harmonize them, in spite of the dissimilitude of manners between the North and the South, which were now for the first time brought into political relations? Could the Virginian descendant of the Cavaliers, and the New-Englander with his hereditary Puritanism,—the aristocratic Southern planter, and the self-made man from Massachusetts or Connecticut,—at once feel that they were countrymen and brothers? What did John Adams think of Jefferson?—and Samuel Adams of Patrick Henry? Did not North and South combine in their deference for the sage Franklin, so long the defender of the colonies in England, and whose scientific renown was already world-wide? And was there yet any whispered prophecy, any vague conjecture, circulating among the delegates, as to the destiny which might be in reserve for one stately man, who sat, for the most part, silent among them?—what station he was to assume in the world's history?—and how many statues would repeat his form and countenance, and successively crumble beneath his immortality?

The letter before us does not answer these inquiries. Its main feature is the strong expression of the uncertainty and awe that pervaded even the firm hearts of the Old Congress, while anticipating the struggle which was to ensue. "The commencement of hostilities," it says, "is exceedingly dreaded here. It is thought that an attack upon the troops, even should it prove successful, would certainly involve the whole continent in a war. It is generally thought that the Ministry would rejoice at a rupture in Boston, because it would furnish an excuse to the people at home" [this was the last time, we suspect, that John Adams spoke of England thus affectionately], "and unite them in an opinion of the necessity of pushing hostilities against us."

His next letter bears on the superscription, "Favored by General Washington." The date is June 20, 1775, three days after the battle of Bunker Hill, the news of which could not yet have arrived at Philadelphia. But the war, so much dreaded, had begun, on the quiet banks of Concord River; an army of twenty thousand men was beleaguering Boston; and here was Washington journeying northward to take the command. It seems to place us in a nearer relation with the hero, to find him performing the little courtesy of leaving a letter between friend and friend, and to hold in our hands the very document intrusted to such a messenger....