A Bilateral Division of the Parietal Bone in a Chimpanzee; with a Special Reference to the Oblique Sutures in the Parietal 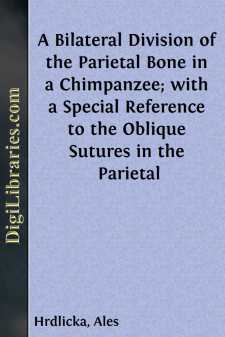 The first to describe a case of division of the parietal bone in apes was Johannes Ranke, in 1899. The skull in question is that of an adolescent female orang, one of 245 orang crania in the Selenka collection in the Munich Anthropological Institute. The abnormal suture divides the right parietal into an upper larger and a lower smaller portion. "The suture runs nearly parallel with the sagittal suture," but, as the illustration shows (), it descends in its posterior extremity towards the temporo-parietal suture, and terminates in this a few millimetres in front of the lambdoid suture. The abnormal suture shows but little serration, and the articulation of the two divisions of the parietal bone is squamous in character, the lower portion overlapping the upper. Below the junction of the abnormal with the coronal suture, the latter takes a pronounced bend forward. A similar bend in the coronal suture is present in the same specimen on the left side. This is common among the other orang skulls in the collection. The portions of the coronal suture below and above the bend differ somewhat in character.

Besides the above-mentioned complete division, Ranke found among the 245 orang skulls 13 with incomplete division of the parietal bone. The division consisted invariably of a longer or shorter remnant of a horizontal "parietal suture," ending in the coronal suture at the top of the bend above referred to. A similar anterior remnant of an abnormal parietal suture was found by Ranke in a young chimpanzee skull; but the author questions the word "chimpanzee," which evidently means that the identity of the skull is somewhat doubtful.

In consequence of his finds, Ranke believes both complete and incomplete divisions in the parietal bone to be much more frequent in the orang than in man. He also thinks that the bend usually present in the coronal suture in the orang signifies that, "even where there are no traces of a parietal suture, such a suture has actually existed in an earlier stage of development." This implies the development of the adult parietal bone in the orang from two original segments, one above the other.

The divisions which I am about to describe occur, one in each parietal, in the skull of a nine-year-old male chimpanzee, which was captured, when young, in West Africa. Later on he was one of the attractions of the Barnum and Bailey Circus, and was familiarly known as Chico. The chimpanzee died in 1894, since when his skin and bones have been preserved in the American Museum of Natural History, New York City. Prof. J. A. Allen, the curator of the Zoölogical Department of the Museum, has kindly given me permission to describe the skeletal parts for publication.

The skull under consideration shows in general a good development and an almost perfect symmetry. The capacity of the brain cavity, measured according to Flower's method, is 390 c.c.

The masculine features of this skull, and particularly the temporal ridges, are not quite as marked as those of another skull of an adolescent male chimpanzee in the Museum. The temporal ridges are slightly prominent, and in their middle third, over part of the frontal and the parietal bones, not more pronounced than in some human crania. They are, however, situated very high. Their upper lines or boundaries touch each other over a part of the sagittal suture, a little back of the bregma; while the lower lines approach to within 6 mm....