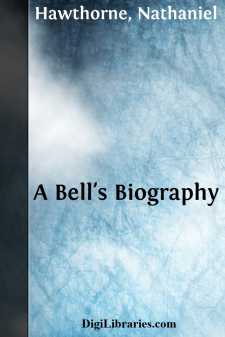 Hearken to our neighbor with the iron tongue. While I sit musing over my sheet of foolscap, he emphatically tells the hour, in tones loud enough for all the town to hear, though doubtless intended only as a gentle hint to myself, that I may begin his biography before the evening shall be further wasted. Unquestionably, a personage in such an elevated position, and making so great a noise in the world, has a fair claim to the services of a biographer. He is the representative and most illustrious member of that innumerable class, whose characteristic feature is the tongue, and whose sole business, to clamor for the public good. If any of his noisy brethren, in our tongue-governed democracy, be envious of the superiority which I have assigned him, they have my free consent to hang themselves as high as he. And, for his history, let not the reader apprehend an empty repetition of ding-dong-bell. He has been the passive hero of wonderful vicissitudes, with which I have chanced to become acquainted, possibly from his own mouth; while the careless multitude supposed him to be talking merely of the time of day, or calling them to dinner or to church, or bidding drowsy people go bedward, or the dead to their graves. Many a revolution has it been his fate to go through, and invariably with a prodigious uproar. And whether or no he have told me his reminiscences, this at least is true, that the more I study his deep-toned language, the more sense, and sentiment, and soul, do I discover in it.

This bell—for we may as well drop our quaint personification—is of antique French manufacture, and the symbol of the cross betokens that it was meant to be suspended in the belfry of a Romish place of worship. The old people hereabout have a tradition, that a considerable part of the metal was supplied by a brass cannon, captured in one of the victories of Louis the Fourteenth over the Spaniards, and that a Bourbon princess threw her golden crucifix into the molten mass. It is said, likewise, that a bishop baptized and blessed the bell, and prayed that a heavenly influence might mingle with its tones. When all due ceremonies had been performed, the Grand Monarque bestowed the gift—than which none could resound his beneficence more loudly—on the Jesuits, who were then converting the American Indians to the spiritual dominion of the Pope. So the bell,—our self-same bell, whose familiar voice we may hear at all hours, in the streets,—this very bell sent forth its first-born accents from the tower of a log-built chapel, westward of Lake Champlain, and near the mighty stream of the St. Lawrence. It was called Our Lady's Chapel of the Forest. The peal went forth as if to redeem and consecrate the heathen wilderness. The wolf growled at the sound, as he prowled stealthily through the underbrush; the grim bear turned his back, and stalked sullenly away; the startled doe leaped up, and led her fawn into a deeper solitude. The red men wondered what awful voice was speaking amid the wind that roared through the tree-tops; and, following reverentially its summons, the dark-robed fathers blessed them, as they drew near the cross-crowned chapel. In a little time, there was a crucifix on every dusky bosom. The Indians knelt beneath the lowly roof, worshipping in the same forms that were observed under the vast dome of St. Peter's, when the Pope performed high mass in the presence of kneeling princes. All the religious festivals, that awoke the chiming bells of lofty cathedrals, called forth a peal from Our Lady's Chapel of the Forest. Loudly rang the bell of the wilderness while the streets of Paris echoed with rejoicings for the birthday of the Bourbon, or whenever France had triumphed on some European battle-field. And the solemn woods were saddened with a melancholy knell, as often as the thick-strewn leaves were swept away from the virgin soil, for the burial of an Indian chief.

Meantime, the bells of a hostile people and a hostile faith were ringing on Sabbaths and lecture-days, at Boston and other Puritan towns. Their echoes died away hundreds of miles southeastward of Our Lady's Chapel. But scouts had threaded the pathless desert that lay between, and, from behind the huge tree-trunks, perceived the Indians assembling at the summons of the bell. Some bore flaxen-haired scalps at their girdles, as if to lay those bloody trophies on Our Lady's altar. It was reported, and believed, all through New England, that the Pope of Rome, and the King of France, had established this little chapel in the forest, for the purpose of stirring up the red men to a crusade against the English settlers....