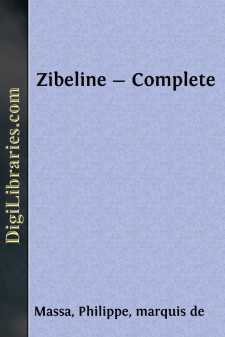 I have often declared that I never would write prefaces! But how can one resist a fine fellow who brings one an attractive manuscript, signed with a name popular among all his friends, who asks of one, in the most engaging way, an opinion on the same—then a word, a simple word of introduction, like a signal to saddle?

I have read your Zibeline, my dear friend, and this romance—your first—has given me a very keen pleasure. You told me once that you felt a certain timidity in publishing it. Reassure yourself immediately. A man can not be regarded as a novice when he has known, as you have, all the Parisian literary world so long; or rather, perhaps, I may more accurately say, he is always a novice when he tastes for the first time the intoxication of printer's ink.

You have the quickest of wits and the least possible affectation of gravity, and you have made as well known in Mexico as in Paris your couplets on the end of the Mexican conflict with France. 'Tout Mexico y passera!' Where are they, the 'tol-de-rols' of autumn?

Yesterday I found, in a volume of dramatic criticism by that terrible and charming Jules Barbey d'Aurevilly, an appreciation of one of your comedies which bears a title very appropriate to yourself: 'Honor.' "And this play does him honor," said Barbey d'Aurevilly, "because it is charming, light, and supple, written in flowing verse, the correctness of which does not rob it of its grace."

That which the critic said of your comedy I will say of your romance. It is a pretty fairy-story-all about Parisian fairies, for a great many fairies live in Paris! In fact, more are to be found there than anywhere else! There are good fairies and bad fairies among them. Your own particular fairy is good and she is charming. I am tempted to ask whether you have drawn your characters from life. That is a question which was frequently put to me recently, after I had published 'L'Americaine.' The public longs to possess keys to our books. It is not sufficient for them that a romance is interesting; it must possess also a spice of scandal.

Portraits? You have not drawn any—neither in the drawing-rooms where Zibeline scintillates, nor in the foyer of the Comedie Francaise, where for so long a time you have felt yourself at home. Your women are visions and not studies from life—and I do not believe that you will object to my saying this.

You should not dislike the "romantic romance," which every one in these days advises us to write—as if that style did not begin as far back as the birth of romance itself: as if the Princess of Cleves had not written, and as if Balzac himself, the great realist, had not invented, the finest "romantic romances" that can be found—for example, the amorous adventure of General de Montriveau and the Duchesse de Langlais!

Apropos, in your charming story there is a General who pleases me very much. How was it that you did not take, after the fashion of Paul de Molenes, a dashing cavalry officer for your hero?—you, for whom the literary cavalier has all the attractions of a gentleman and a soldier...?