Zero the Slaver A Romance of Equatorial Africa 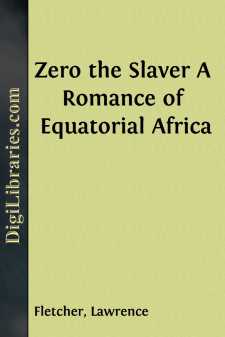 The above-named Sum will be paid to any person giving information which will lead to the discovery of the whereabouts of a young Englishman named Richard Grenville, who was last seen at Durban on 15th December, 1877.

Facing this striking announcement, and with his back to the Standard Bank of South Africa, in Durban, stood, one morning in July, 1880, a wiry-looking, clean-shaved man of about five- or six-and-thirty, dressed in a rough grey homespun suit.

Man after man paused, read, marked, learned, and, no doubt, inwardly digested, the contents of the advertisement, then passed on his way without giving the matter a second thought—beyond, perhaps, half wishing, in a lazy sort of way, that he knew something about this man who seemingly was so much wanted by his own people. But our grey-coated friend still stood there, and appeared to be literally devouring the announcement.

At length he turned sharply away with a muttered “Hum! It’s a big pile. Five thousand dollars—now, I wonder if—” But here his keen eye noted the stoppage of another person—a fashionably-dressed man—before the advertisement, which seemed of considerable personal interest to him, judging from the way he stared at it, and from the fact that his cigar dropped from his lips, which mechanically opened with an involuntary exclamation the moment the wording caught his eye. Quickly recovering himself, the man glanced keenly at grey-coat, who was, however, diligently charging his pipe, and then he, too, like his predecessors, passed on his way.

“Snakes!” muttered our friend. “Now, I wonder who that swell is, and why this lay startled him so infernally. Reckon I’ll have to get you weighed up before I clear, old chap;” and, lighting his pipe, he moved briskly away in the direction of Masterton and Driffield’s office.

Arrived there, he in due course expressed to a young clerk his desire to interview one of the principals on the subject of a considerable interest which he proposed to acquire in certain land at Durban, and very shortly found himself closeted with Mr Driffield.

“I have called, sir,” he said, “to see you regarding this advertisement of yours for one Richard Grenville, and to learn what further details you can afford me beyond the information given in the announcement.”

Our friend, be it observed, was something of a curiosity. A thorough-bred Yankee, he seldom or never indulged in “Americanisms” of any kind except when soliloquising, which he had a singular habit of doing whilst deducing his own peculiar theories.

“Oh!” said the lawyer, in a somewhat aggrieved tone. “My clerk stated that you wished to consult me with regard to the purchase of some land. That advertisement was only printed off last night, and if we have had one call concerning it, we have already had at least two hundred.”

“I didn’t choose to let your clerk know my business, or anything about me, Mr Driffield,” replied grey-coat curtly; “but here’s my card, sir, and now let me hear all you’ve got to say, without further loss of time.”

Mr Driffield took the pasteboard, read it, and stared blankly at the other, who laughed quietly, and then reached out his hand, which the lawyer grasped in most unmistakably hearty fashion....