Zeppelin The Story of a Great Achievement 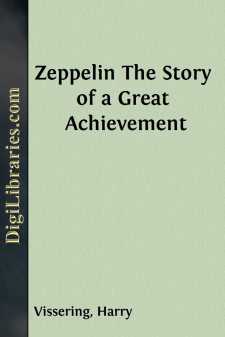 CHAPTER I Zeppelin and His Airships

Count Ferdinand von Zeppelin was born at Constance on Lake Constance (Bodensee), Germany, July 8th, 1838. His boyhood was not unlike that of others in Central Europe; and, as a matter of course, young Zeppelin was enrolled at a military school at Ludwigsburg, from which he in due time graduated into a lieutenancy in the Wurttemberg Army, but he was not particularly enthralled with the quiet life of a garrison in peace time. His creative faculties demanded something more of life than the routine of inspections, drills and dress parades. When he died on March 8, 1917, in Berlin, the whole world mourned the loss of one whose genius and vision had developed the rigid airship into a practical vehicle of the sky, proved of inestimable value in peace and war. Zeppelin had lived to see more than a hundred rigid airships built from his designs and under his personal supervision. And so completely was his personality interwoven with the creation of these aerial giants that throughout the world all dirigible lighter-than-air craft are looked upon as the noted Zeppelins, and are referred to as such. It is an unconscious but none the less fitting tribute to the man who, starting when he was past the half century mark, has made possible the greatest of all vehicles for us to use in our new dominion—the air.

An Officer in the American Union Army

Zeppelin “LZ-3” in First Temporary Land Shed.Which was erected and used while the new double shed, completed in 1908, was being built at Friedrichshafen.

Here in America the Civil War was attracting the adventurous from all parts of the world and shortly after it started, Zeppelin came over to join the Union Army as a volunteer officer and thus to add to his military education, but Zeppelin was not only the officer. He loved to roam in out of the way places and whenever opportunity afforded he organized hunting parties and went off on long sojourns in the then sparsely inhabited regions of the Mississippi Valley. Here he played the explorer and wrote letters back home dwelling on the pleasures of exploration and the possibilities in store for him who could invent something that would take one to the far and inaccessible parts of the earth.

His impressions gained during the American Civil War, where he had the opportunity of making captive balloon ascensions, and also in the Franco-German War where he had the opportunity of watching the numerous balloons leaving Paris during the siege, no doubt, first originated in Zeppelin’s mind the thought of developing a large rigid airship. In fact, as early as 1873 he designed a large rigid airship, sub-divided into single compartments and he emphasized the importance of such aircraft for long distance transportation in order to help in the civilization of mankind.

In 1887 Zeppelin submitted a memorandum to the King of Wurttemberg in which he explained in detail the requirements of a really successful airship and stated many reasons why such airships ought to be large and of rigid construction....