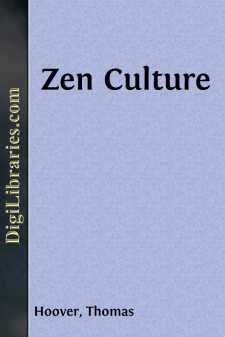 Anyone who examinesthe Zen arts is immediately struck by how modern they seem. Many of the most famous stone gardens are abstract expressionism pure and simple, created out of found objects. The ceramics of the sixteenth-century Zen artists could be interchanged with the rugged pots of our own contemporary crafts movement and few people would notice a difference. Ancient Zen calligraphies, bold and slashing, suggest the monochromes of Franz Kline or Willem de Kooning, and if the word "impressionistic" has any real meaning left, the spontaneous, intuitive, impulsive Zen painters should have first claim to it. The apparent nonsense and illogic of Zen parables established the limitations of language long before the theater of the absurd decided to ridicule our modern doublespeak; indeed, our new-found skepticism about language as a medium for communication was a commonplace to Japanese artists who created both a drama (the No) and a poetry (the Haiku) that neatly circumvent reliance on mere words for expression—and in two entirely different ways. Four-hundred-year-old Zen architecture appears to be virtually a copy of contemporary design ideas: modular sizing, exposed woods and materials, movable partitions, multifunctional rooms, bare walls and uncluttered space, indirect lighting effects, and a California marriage of house and garden. The celebrated tea ceremony might be considered an early form of Japanese group therapy, while Zen landscape gardens are nothing less than a masterful deception masquerading as the "natural" look.

If all this were not coincidence enough, consider for a moment our present-day artistic conventions and aesthetic ideals. Like much of what we consider "modern," Zen arts tend to be as simple as possible, with clean, even severe, lines. Decoration for its own sake is virtually nonexistent; Zen artists had no more taste for the ornate than we do today. The works of medieval Zen artists were rough and asymmetrical, with a skillful exploitation of deliberate imperfections and blemishes to make the viewer aware of both the materials used and the process of creation. If it is true that classic art makes one aware of the form and romantic art makes one aware of the artist, Zen art makes one aware of the work of art itself.

We have absorbed into our Western culture almost unawares such Zen cultural forms and aesthetic principles as Japanese ideas of architecture, gardens, and flower arranging. Other forms, such as Haiku poetry and Zen-style ceramics, we have borrowed in a more open-handed way, freely acknowledging the source. Actually, none of the Zen arts is really out of our reach, and a critical following has developed in the West for almost all of them. The great Irish poet and dramatist William Butler Yeats embraced the Zen-inspired No drama, although he probably knew next to nothing about Zen. (For that matter, we should recall that no English-language books were written on Zen until well into the twentieth century.) It seems fair to say that the Zen arts have touched us because they express some view of the world that we have, several hundred years later, quite independently come to share....